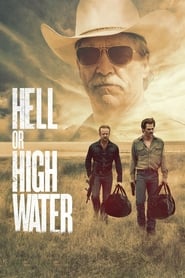 After debuting at the Cannes Film Festival in May, early reviews for David Mackenzie's Hell or High Water were strong, but nothing over-the-top. I've been an outspoken fan of the filmmaker for a long time after catching my attention with strong and artistic indie hits such as Perfect Sense and Starred Up. Therefore, I'm confident in declaring Mackenzie's latest modern-day western as one of the year's finest pieces of filmmaking.

Tanner (Ben Foster) and Toby Howard (Chris Pine) are a pair of poor Texan brothers who have taken to robbing a vulnerable bank chain in their home state. And after the nearly-retired sheriff, Marcus Hamilton (Jeff Bridges), jumps on the case and finds himself right on their heels, these loyal siblings must balance accumulating the funds they need with the likelihood of getting caught by the police.

Fans of the western genre, like myself, are guaranteed to enjoy Mackenzie slow-classic touch. Hell or High Water adequately blends together timely humor, suspenseful action and exceptional characters. A stark contrast exists between these onscreen siblings. Ben Foster is unforgettable as an impulsive and edgier released felon, while Chris Pine shines as a more timid and smarter counterpart. Despite their many differences, connections are easily formed with both characters. Hell or Highwater reveals its intriguing secrets slow enough to let Foster and Pine hook the audience, but quick enough to never keep them waiting. And outside of a minimally prolonged finale, Hell or Highwater flows without a hitch, leaving Mackenzie's film as one of 2016's most impressive offerings.