Review | Into the Woods
Search 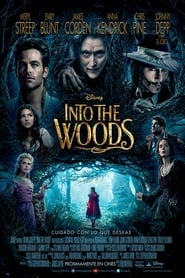 As the calendar year turns to 2015 and movie theaters become mobbed by people of all ages enjoying the freedom of the holiday season, I nestled comfortably into my seat to catch the latest Oscar-buzzed musical, Into the Woods. With many worthwhile films entangled in the crowded Best Picture race, I wanted to see for myself if Rob Marshall's adapted twist on the classic Brothers Grimm fairy tales is a justifiable inclusion. Marshall certainly has a bit of history on his side as the director of the 2003 Best Picture winning musical, Chicago, which tallied an astounding 6 wins and 13 nominations all together. Yet, even though Into the Woods may slip into the final pack for the year's most prestigious award, I wouldn't expect a similar result as 2003.

A baker and his wife (played by James Corden and Emily Blunt) are visited by their witch of a neighbor (Meryl Streep) and tasked with collecting specific items from the famous Brothers Grimm fairy tales we all know and love: Little Red Riding Hood, Jack and the Beanstalk, Cinderella and Rapunzel. If they can collect the items in 3 days time, then the witch will reverse her curse of infertility on the baker's wife. So the husband and wife set out deep into the unpredictable woods in hopes of obtaining the items and beginning a family together.

While I definitely understand the appeal, meaning Into the Woods combines a Tony-winning soundtrack with familiar childhood stories in a modern and genre-bending new light, I will never understand or defend the feature's punishing third act. As someone who admittedly has no knowledge of the original Broadway musical, the film's final portion does nothing but tear down an otherwise sturdy foundation built by a solid first two acts. Into the Woods does an exceptional job of developing and and interconnecting these legendary tales into a fresh new story, but everything after Cinderella's marriage to the prince is an absolute abomination. The story becomes completely outstretched, the songs weaken in quality and everything falls into disarray. Perhaps the award winning musical offers a similar regressed finale, but it clearly doesn't work in the film's favor. Therefore, Into the Woods culminates as a mediocre musical adaptation at best.

Despite the feature's regrettably sub-par third act, I must admit that the first hour and a half is actually a delight. Dwelling on Meryl Streep's nearly annual inclusion at the Academy Awards ceremony always makes for good fodder, but it shouldn't be overstated that the queen of Hollywood usually warrants the attention she's given, and her performance here is no exception. Alongside Streep, castmates Emily Blunt and Anna Kendrick happen to shine the brightest. This female-heavy showcase is filled with powerful vocal contributions from everyone involved. But even though Into the Woods delivers good tunes and stunning visuals, the sum of these parts isn't nearly enough to undo the film's harshly tarnished conclusion.

Although Disney has a history of catering to families, this drawn out and over two hour affair is probably too much for younger children to sit through. Furthermore, in a surprising turn of events, Into the Woods stays true to the dark nature evident in the Brothers Grimm fairy tales. The film doesn't harp on these violent and predatory undertones, but it also doesn't ignore them in prototypical Disney fashion. Into the Woods is a middle of the pack musical that may find favor with Oscar voters, but it won't top many of the sprouting year's-best lists either.