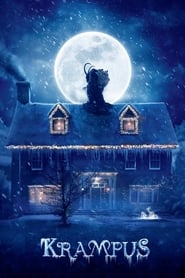 As a lifelong fan of the comedy-horror genre, generally positive reviews immediately perked my interest in Michael Dougherty's Krampus. Boasting a surprisingly respectable cast including Oscar Nominee Toni Collette and comedy regulars Adam Scott and Anchorman's David Koechner, I was really hoping that Krampus could deliver a rare, but enjoyable, holiday scare.

Youngster Max, (Chef's Emjay Anthony), wants nothing more than to spread the Christmas cheer to his mother (Collette), father (Scott) and sister. However, when his extended family stops over for some festivities and their destructive behavior spoils the holiday, Max loses his Christmas spirit and makes a nasty wish that summons a dark and ancient abomination known as Krampus. This demonic force and his evil helpers unleash on the family and force them to work together to survive the ordeal.

I know what you're thinking, "who heard this movie pitch and though it was a good idea"? Well, truth be told, Krampus attempts to model itself in the vein of Gremlins, a holiday comedy-horror that plays well to the audience. And while the humor is infectious and clearly eases the viewer through the film, the lack of authentic scares and an awfully weak finale spoil Dougherty's naughty Christmas tale. Krampus does contain a few exceptional moments, yet the film's closing climactic sequence leaves too big of a blemish to overcome.