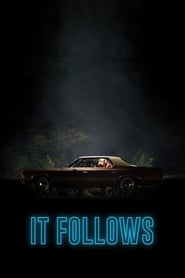 I had the distinct pleasure of catching David Robert Mitchell's new lavishly praised horror film, It Follows, at the Philadelphia Film Festival in October. But for anyone who knows what the daily film festival grind is like, It Follows was my third film that day and it played around 10pm which can feel late for an aging man like myself. Therefore, I wanted to shake off my initial gut reaction from the viewing and give Mitchell's clever suspense film a clean slate, so I ventured to my local theatre for a second go-around.

Maika Monroe stars as Jay, a young woman who meets a boy she really likes and, after a few dates together, decides she wants to sleep with him. After an intimate evening together, he breaks some terrifying news to Jay. He tells her that by having sex together he's passed on a curse to her that appears in the form of an apparition that constantly heads straight for her in a slow creepy walk. But if the entity, which is invisible to anyone who hasn't been cursed, actually reaches her, she's dead.

David Robert Mitchell's brand new horror entry deserves to be lauded for its originality and uniqueness. However, It Follows suffers from a typical fate of never truly developing into much. The film's 100 minute running time plays more like a marathon as the scares become scattered as it's plot crashes into a wall. It Follows boasts an indeniably brilliant premise that fails to take the next step. Genre fans will find a few shining aspects surrounding this STD thriller, and thankfully a smartly written conclusion leaves a lasting impact.