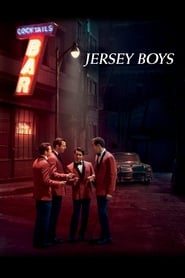 Another film recently reviewed by Greg Rouleau was Clint Eastwood's Jersey Boys. While he tabbed the Broadway musical turned a major motion picture as a hard-fought "B-", I found it a little less amusing. Perhaps my admiration for the musical is what spawns an elevated level of disappointment. Fans of the show are guaranteed to be let down by Eastwood's stamp on the story.

With outstretched first and third acts that incorporate a minimal amount of musical performances from The Four Seasons, Eastwood lets it be known that he's making a film. Unlike Tom Hooper's Oscar Nominated Les Miserables and other modern musical adaptations that operate closely to their originals, Jersey Boys picks and chooses its similarities with the Broadway show. Therefore, the overbearing background which consumes the feature's first hour and creates an excruciating opening portion. Once The Four Seasons finally get into the swing of things and the on-stage performances remind us of everything we loved about the musical, it's too late to salvage.

I was disappointed in much of the acting, especially from newbies John Lloyd Young (as Frankie Valli) and Erich Bergen (as Bob Gaudio). It's always a risky decision to cast unknowns in vital roles and, unfortunately for Eastwood, the choice proves to be detrimental to the final product. Fans of the musical should be warned that, with Jersey Boys, an unsatisfying experience lies ahead.