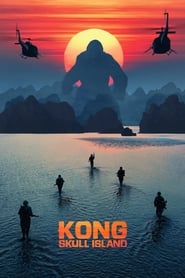 In an era full of reboots and remakes, chain reactions often open the door for classic characters and beloved films to make a return to the big screen. Inevitably, 2014's $500 million worldwide box-office smash, Godzilla, ultimately paved the way for The Kings of Summer director, Jordan Vogt-Roberts, to reintroduce the world to King Kong. And with an infusion of energy and some fresh new ideas, we're given a version of Kong that we've never seen before.

A pair of scientists (John Goodman and Straight Outta Compton's Corey Hawkins) piggy-back on an expedition to an uncharted island in the Pacific where they sense some strange occurrences are taking place. Escorted to this dangerous and unknown territory by an Army helicopter fleet headed by a war-hungry Lieutenant Colonel Preston Packard (Samuel L. Jackson), an unexpected encounter with Kong sends the surviving few deep into the woods of this mysterious island. Forced to withstand attacks from multitudes of different monsters inhabiting the strange land, they all hope they can make it home and live to tell the tale of Kong.

Kong: Skull Island stands as a comedy-rich monster film with only one goal, to entertain the audience. From that perspective, Jordan Vogt-Roberts absolutely delivers the goods. The visuals are amazing and the footage of Kong leaves nothing to be desired. Nightcrawler writer and director, Dan Gilroy, pens a clever story surrounding an island full of new monsters that continues to surprise even as the running-time mounts. However, corn-ball dialogue purposely intended to deliver trailer-made one-liners masks a larger problem with the film. Gilroy lazily uses character interactions to explain the plot to the audience and progress the story. Consequently, Skull Island unravels as nothing more than a thoughtless popcorn flick guaranteed to generate gaudy box-office totals and propel a whole new franchise of films.