Review | Man on a Ledge
Search 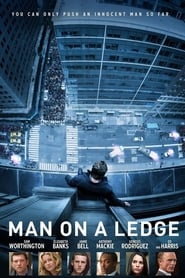 Director Asger Leth was given the keys to the vault for his first major motion picture release, Man on a Ledge. Being financed by Summit Entertainment, Leth was given every resource imaginable to deliver the best possible finished project. His debut action thriller, which stars A-List actors Sam Worthington and Ed harris, couples a talented cast with a sizable $38 million budget. The bar has been set, and all Leth can do is wait and see what happens.

Man on a Ledge follows a former police officer turned fugitive named Nick Cassidy (played by Worthington) as he climbs out onto a hotel ledge in the middle of New York City. When law enforcement responds to the situation, Cassidy refuses to talk to any officer other than Lydia Mercer (played by Elizabeth Banks). However, the longer Mercer spends trying to talk Cassidy off of the hotel ledge, the more she senses that he has an ulterior motive.

Asger Leth's directorial debut proves to be a remarkably mediocre affair. Much like the movie's name, Man on a Ledge proves to be a bland, over-the-top piece of film making. For starters, the feature's plot causes the viewer to ask more questions than the movie can answer. And as the film steadily progresses, the movie resolves in an incomprehensible fashion. Although Man on a Ledge manages to keep the story intriguing, its culmination is beyond believable. As a result, Man on a Ledge losses credibility as a plausible feature.

In addition to its inconceivable flow of events, the film offers a poor usage of one of its central characters. Sam Worthington and Elizabeth Banks do enough to keep the movie enticing, however, the pair of leads fail to carry the movie to another level. Also, Ed Harris co-stars as the film's primary antagonist, David Englander. Englander's character is completely under-utilized and far from impressionable. If properly used, a four time Academy Award nominee such as Ed Harris is capable of great things. Yet, Leth and Man on a Ledge's writer, Pablo Fenjves, miss out on the opportunity.

Notwithstanding each of the detectable flaws in Man on a Ledge, the film still serves as a suitable source of entertainment. This action-packed thrill ride contains a decent amount of laughs and adrenaline-pumping scenes. With a runtime barely passing the 100-minute threshhold, Man on a Ledge begins and ends without a yawn.

As it turns out, mediocrity reigns supreme in Asger Leth's debut effort, Man on a Ledge. The film is sure to entertain, yet the movie relies too heavily on that bright spot. Otherwise, it's story is far from believable and all too unconvincing. Man on a Ledge has almost no depth and it offers little more than being a fairly smooth watch.