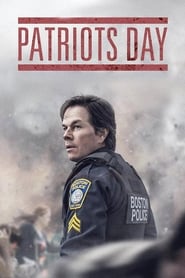 You don't have to look any further than his latest trio of films to recognize that Peter Berg has purposely aimed his filmmaking talents at tackling real-life stories of human struggle. 2013's Lone Survivor stood as a resonating examination of the brotherhood and sacrifice of a stranded Navy Seal team caught under fire by Taliban militants, while Deepwater Horizon centered around the untold story of oil rig workers caught in extreme explosions that resulted in the catastrophic BP oil-spill off the Gulf coast. And as his movie timelines creep closer to present day, Berg's new release, Patriots Day, focuses on the orchestrated manhunt to capture the 2013 Boston Marathon Bombers. Although Berg hasn't announced his next directorial effort and considering his recent string of critical success, it will be interesting to see if Berg sticks to this thematic formula.

Patriots Day is annually celebrated with the long-standing tradition of the Boston Marathon. And in 2013, a day like any other, a pair of radicalized Islamic extremists (played by Alex Wolff and Themo Melikidze) detonated two self-made explosives near the marathon's finish-line, killing a trio of civilians and injuring more than 250 others. Boston's police department, headed by Commissioner Ed Davis (John Goodman) and with the help of officer Tommy Saunders (Mark Wahlberg), aided the FBI in their search to identify and capture the Tsarnaev brothers.

Some have argued that it's "too soon" for Peter Berg to make such a film. However, to the director's credit, he bridges his Hollywood re-enactment with real-life events by editing a timeline of actual investigative footage into the film. This life-like approach cements a feeling of legitimacy and accuracy that adds a great deal to the movie's dramatic effect. Patriots Day begins by capturing the city's fragile and emotional state following these traumatic events, and quickly morphs into an intense and thrilling game of cat and mouse between the FBI and the Tsarnaev brother. And while Mark Wahlberg has never been lauded as one of Hollywood's most gifted actors, Berg continues to evoke escalating quality of work from him with each subsequent collaboration. In fact, the film's entire cast is remarkably on-point as a long list of strongly-delivered performances support this winning effort. Outside of a few over-dramatized moments of asinine "Boston strong" dialogue that ultimately suggest these events as a city's tragedy rather than a nation's, Patriots Day offers sound technical achievements and an extremely compelling recount of this devastating moment in recent history.