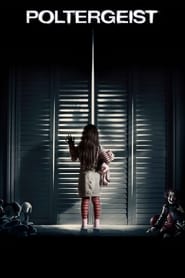 Thanks to a barren amount of originality floating throughout Tinseltown, remakes have become a necessity in the film industry, especially with the horror genre. Gil Kenan reworks Steven Spielberg's original story idea as director of this year's reboot, Poltergeist.

After their father (Sam Rockwell) loses his job, the Bowens reluctantly relocate to a new suburban home. But once strange occurrences around the house begin to escalate to frightening heights, the family realizes that they're being terrorized by angry spirits who have kidnapped their youngest daughter, Madison (Kennedi Clements). They must enlist the help of a paranormal expert and band together to save Maddy.

Times have changed and, nowadays, a PG-13 rating for a horror movie is a huge red flag. So as expected, Poltergeist runs low on terrifying scares and delivers some of the most unforgivable dialogue I've seen in a long time. As an outspoken fan of the versatile Sam Rockwell, even his most dedicated talents can't keep this chintzy remake from disaster. A brutal screenplay from David Lindsay-Abaire and a large collection of awful supporting performances plague this harshly lacking scary movie. Do yourself a favor a huge favor and take a pass on Poltergeist.