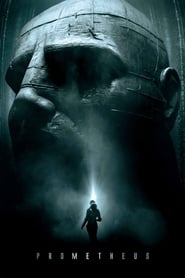 Since legendary director Ridley Scott (Gladiator and Black Hawk Down) first announced the plans for his newest science fiction endeavor Prometheus, many have speculated that the film would be a prequel to the director's most prolific picture to date, 1979's Alien. Let me preface this review by saying that Prometheus is only "kind of" a prequel. Less so a prequel and more so a deeper examination into the Alien universe that just so happens to come full circle. Now, with all cards on the table and a midnight and 3D showing of Ridley Scott's Prometheus behind me, let's get to the good stuff.

Set in the waning years of the twenty-first century, Prometheus follows a crew of scientists on a space mission to a planet believed to hold all of the answers to the origins of the human race. Meredith Vickers (played by Theron) and her human-like robot sidekick named David (played by Fassbender) lead the team of space travelers to the darkest depths of the universe. Once the crew arrives, head scientist Elizabeth Shaw (played by Rapace) and company find themselves in a battle to save Earth and the existence of the human race.

Scott once again elicits a visionary journey into the genre of science fiction.Prometheus is a delicately crafted riddle, purposely meant to stifle the viewer. Succeeding on an absolutely profound and visual level, Prometheus is a once in a lifetime optical euphoria. Scott goes beyond creating a world, he's officially created a universe. The effects are simply mesmerizing and beyond anything we've seen before, it's truly groundbreaking territory. Prometheus is without question a visual masterpiece, yet the plot intentionally asks far more questions than it ever intends to answer. By leaving an abundance of the story utterly unexplained, Prometheus has two consequential effects on the audience. First, it challenges viewers to really use their brains and think hard to try to piece together the bits and pieces they've been given to make sense of the whole experience. Depending upon the viewer, that can either be a positive or a negative. Furthermore, by leaving many aspects of the film open ended, Prometheus will ultimately feel like a rather feeble and weakly constructed set of ideas that cheapens the movie's stunning visuals. As a result, it appears as though Scott and writer Damon Lindelof have delivered a magnificent creation that even they know very little about.

On an entertainment level, Prometheus flows rather well and never feels too dull or boring. The two hour plus feature manages to keep the audience's attention, even throughout a handful of disturbingly irrational scenes (i.e. Rapace's abdominal surgery). Although the scares are surprisingly minimal, Scott does an adequate job of keeping the audience engaged throughout the film and it's a shame that the story leaves so many loose ends. In addition to its entertainment value, Prometheus offers a well rounded and effective cast. Charlize Theron never disappoints and Michael Fassbender's phenomenal work on screen only seems to reiterate the fact that he was undoubtedly robbed of an Oscar Nomination last year for his work in Steve McQueen's Shame. Also, Idris Elba is slowly starting to make a name for himself and I can see massive amounts of talent pouring out of every performance he gives, including this one. With the aid of an intriguing story and a wonderful cast, Prometheus leaves its mark as an entertaining and memorable thrill ride.

Make no mistake about it, sci-fi lovers and avid fans of Alien are sure to enjoy this new and fresh thought provoking exploration into the franchise. But as a whole, I was frustrated by Scott's refusal to answer enough of his own questions. Obviously you must commend the director's attempt to address the curiosities of life's deepest and darkest mysteries. But if Scott wants to center a film around difficult and meaningful life questions, then the responsibility is solely on him to approach the ideas in a cohesive and constructive manner. Still, Prometheus is visually stunning and mystifying enough to drag you beyond its disappointing ambiguity.