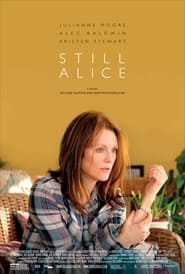 Completely shifting gears from a mindless comedy to a sentimental Oscar-bait drama, Julianne stars in Still Alice. Released in a limited fashion prior to the new year, in order to qualify for the awards season, Moore has already been handed an Academy Award Nomination for her work in the film. And if everything unravels as many prognosticators are predicting (including myself), on February 22nd she'll be accepting her first Oscar statue and delivering a speech for the whole world to witness.

Still Alice follows a renowned linguistics professor from Columbia University (Julianne Moore) who discovers tiny lapses in her memory around her 50th birthday. When these fearful instances start to increase in frequency, Alice visits a physician and discovers that she's suffering from a genetic form of early onset Alzheimer's disease. As the illness begins to deteriorate her mental capacity, Alice and her loved ones are all forced to live with these heart-breaking consequences.

I've always enjoyed Julianne Moore's long list of accomplished work. But after sitting through Still Alice's relentless and painful melodrama for 100 minutes, I came to the realization that her presumed Oscar win would be more of a "lifetime achievement" recognition than the repercussions of this specific role. 2014 boasted a fine collection of exceptional lead performances from women, some of which were far superior to Moore's work here. And although she clearly does the most she can with a feeble screenplay and a lackluster story, there are plenty of reasons to avoid this over-bearing drama.