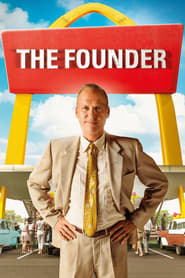 "If my competitor were drowning, I'd stick a hose in his mouth and turn the water on". And that's all you need to know about Ray Kroc and the manner in which he transformed McDonald's from a successful family-run restaurant into a global fast-food chain. Earning the biopic treatment, John Lee Hancock - director of The Blind Side and Saving Mr. Banks - teams with Michael Keaton to deliver a compelling examination of capitalism's cutthroat nature in The Founder.

Once struggling milkshake machine salesman Ray Kroc (Keaton) learns the ins and outs of the small California-based burger shop, McDonald's, he envisions a golden opportunity for growth and franchising. Not look after, Kroc weasels his way into a limited partnership with sibling owners, Mac and Dick McDonald (John Carroll Lynch and Nick Offerman). But as this trio of business partners fails to see eye-to-eye on key issues, Kroc must take any means necessary to make his vision become a reality.

As a ruthless depiction of the American dream modestly tempered by well-scripted moments of humor, John Lee Hancock's The Founder mirrors a hybrid of recent biopics such as The Social Network and The Wolf of Wall Street. Ray Kroc's character becomes more and more interesting as we see his hunger for success grow wildly out of control, to the point where he gladly takes whatever he wants. Michael Keaton is the main attraction here, as he breathes a sinful likability into the real-life persona of an American entrepreneur. The film's entertaining screenplay, which is wonderfully assisted by Keaton's performance, crafts a complex character that the audience hates to love. There are a few deficiencies within the film, like its failure to break any new ground from a cinematic and storytelling standpoint, which creates a rather limited ceiling of achievement. But, if nothing else, The Founder stands as a smoothly-paced and enlightening watch, highlighted by a gifted lead actor and a realistic journey into the world of big business.