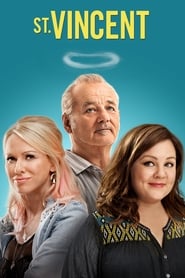 St. Vincent is a charming little film that's rough around the edges thanks to Murray's wonderful title-character turn as a grouchy Vietnam War veteran who's cornered into taking his new neighbor's son under his wing. Broke and desperate for a steady source of income, Vin becomes an unconventional babysitter of sorts as he leads young Oliver on trips to the race track and teaches the boy how to defend himself. This appealing tale transforms the typical anti-hero into a special kind of role model on the backbone of Murray's innate ability to muster up the laughs. In addition to Murray, comedic forces such as Melissa McCarthy and Chris O'Dowd offer their own bright spots to St. Vincent and the overall effect is a winning effort for the film's first-time director.

Although St. Vincent is nothing groundbreaking or exceptional, it's a solid film that's destined to please the mass audiences. Fans of Murray will not be disappointed, as the actor gives the level of performance that has an outside chance of earning him the type of awards season recognition he hasn't seen since in nearly a decade.