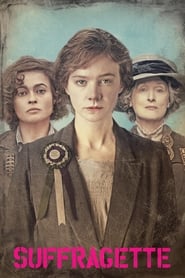 Carey Mulligan is one of the most talented actresses in the industry that no one really talks about. While other leading ladies like Jennifer Lawrence, Emma Stone and Jessica Chastain tend to leave their mark on widely marketed features, Mulligan embraces the challenges of less publicized indie dramas. Her latest work is highlighted in Suffragette, filmmaker Sarah Gavron's depiction of the hardships endured by English women throughout their lengthy quest to achieve the right to vote.

Maud (Mulligan) works ungodly hours for unfair wages as a laundress in early 20th century England. After she discovers a coworker is a suffragette, Maud slowly becomes more involved in the feminist movement. She willingly defies her husband's wishes and Maud risks everything for the greater good of women's rights.

To Suffragette's discredit, the film screams a bias recollection of 1910s England. Both written and directed by women, the film unapologetically portrays every single male character in a negative light somehow. It's difficult to believe that these female warriors didn't receive support from at least a small faction of men. Either way, Carey Mulligan's Oscar-caliber performance and an engaging story do an admirable job of luring the audience. Suffragette hardly separates itself from other decent films of the year, but it's a worthwhile watch in its own right.