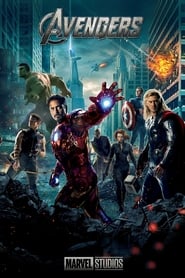 After a record breaking opening weekend and crossing the $200 million box office plateau, Marvel's The Avengers has seemingly surpassed all of the hype. The well received blockbuster has done just about everything except solidify itself as the greatest movie of all time (and who knows, it's still early). Director and scribe Joss Whedon has quickly reinvented himself as one of Hollywood's best writers. After also penning the well received genre bending hit The Cabin in the Woods, 2012 has become the year of Whedon. And with the undeniable success of what's sure to be the franchise's first installment, I'd expect to start seeing a lot more of him.

Loki, the brother of Thor, ventures to Earth and steals the Tesseract, an energy source of unknown potential. Soon after, Nick Fury, the director of a peace-keeping espionage agency known as S.H.I.E.L.D., is forced to reactivate the "Avengers Initiative" in order to recover the Tesseract and put an end to Loki's fatal plans. Fury calls on the likes of Tony Stark/Iron Man (played by Downey Jr), Steve Rogers/Captain America (played by Evans), Natasha Romanov/Black Widow (played by Johansson), and Bruce Banner/The Hulk (played by Mark Ruffalo) to stop Loki and help save Earth from destruction and tyranny. With the aid of Thor (played by Chris Hemsworth) and Clint Barton/Hawkeye (played by Jeremy Renner), The Avengers become our planet's greatest protectors.

The Avengers is the exact definition of a "Summer Blockbuster". This action-packed thrill ride plays out like a beautiful musical number, perfectly calculated and harmonious on all levels. Writer/Director Joss Whedon, who's mostly recognized for his irrefutable excellence in constructing a screenplay, rises to the occasion from the director's chair. He brilliantly transforms what could have been a jumbled mess of misused characters into a coherent and convincing action masterpiece. With The Avengers, there's excitement and special effects galore. In fact, more than enough to help ease you through the two hour and twenty-two minute runtime. Whedon goes above and beyond expectations to help create a virtually unmatched superhero all-star film. In addition to its excellent direction, a bright new star emerges on screen. Mark Ruffalo is extraordinary as Bruce Banner and The Hulk. The versatile actor shows off his acting chops and develops the character like never before. I sure hope Ruffalo enjoys the superhero label, because I sense a lot more green in his future (pun intended). It appears as though we've found this generation's Incredible Hulk.

Despite it's glowing reviews and unquestionable amount of success, The Avengers is far from perfect. Whedon's fine script becomes slightly tainted with the overabundance of humor. Much like his other 2012 hit, The Cabin in the Woods, the director and scribe inappropriately uses comedy to try and mask deficiencies in the movie's plot. By the third act, the jokes become a farce and the feature loses a sense of credibility. On the other hand, perhaps the ample amount of humor is needed to help alleviate the picture's lengthy impression. Whatever the reason, the comedy becomes somewhat distracting and expected. Likewise, there's an enormous amount of predictability surrounding the entire film. Outside of all the punchlines, which seem to drop like clockwork, The Avengers manages to unfold in a foreseeable fashion. Don't expect many twists or turns here as Whedon strictly follows the action/superhero formula to a tee. Although The Avengers is an obvious smash hit, it still proves to have its fair share of flaws.

Prior to the start of the 2012 Summer season, most people eagerly awaited the release of Christopher Nolan's The Dark Knight Rises. Well, apparently Batman has met his match ... and several times over. The Avengers and its collection of superheroes has set the bar and set it high. With the aid of a wonderful cast and a phenomenal job by Joss Whedon to make it all work, The Avengers is an absolute must see. Action fan or not, there's plenty to enjoy here.