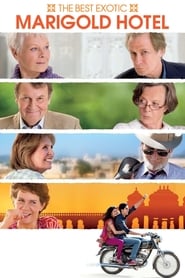 Make no mistake about it, John Madden is a well established director. In 1998, Madden introduced the world to his most famous work, Shakespeare in Love. The critically acclaimed feature went on to receive 13 Academy Award Nominations including one for Madden in the Best Director category. Of the 13 nominations, the film managed to walk away with 7 golden statues. One of those statues went to Best Supporting Actress Judi Dench, a talented actress with multiple Oscar nominations but only one victory. Over a decade later and the Madden/Dench combo has finally re-teamed for this year's feel good movie, The Best Exotic Marigold Hotel. Based on the 2004 novel The Foolish Things by Deborah Moggach, the British comedy looks to cash in on all of its critical support.

The Best Exotic Marigold Hotel centers around a group of British Retirees (played by Dench, Nighy, Wilksinson, and others) who chose to spent their retirement in a less expensive but seemingly exotic hotel in India. Upon their arrival, the guests find that the hotel is far less luxurious than they had anticipated. However, through their shared experiences and zest for new-found life, the retirees discover a sense of hope and charm at The Best Exotic Marigold Hotel.

John Madden works his magic again with another delightful journey into love and life. This time, however, Madden focuses his story through the eyes of the elderly and attempts to shed light on the hopefulness of aging. Rather than cashing in their chips and waiting to pass away, the director brings us along on an adventure with a wonderful collection of characters that easily remind us it's never too late to start another chapter in life. At the center of this heartfelt picture are Judi Dench, Bill Nighy, and Tom Wilkinson. Each character unique and offering an insightful perspective into the journey, these three exceptional actors enable the audience to open their eyes and hearts to the story. Dench is profound and philosophical as the film's main storyteller, and Nighy and Wilkinson pile up enough charm and wit to help carry the film along effortlessly. Praise must also be given to Dev Patel who delivers an even finer performance than his most notable work in the Best Picture winner Slumdog Millionaire. As the smooth talking hotel manager Sonny Kapoor, Patel astonishes and reaffirms his remarkable talents. With what is sure to be one of the year's best ensembles, The Best Exotic Marigold Hotel succeeds at the hands of its star-studded cast.

On the other hand, as is usually the case with films that intend to focus on multiple central characters, The Best Exotic Marigold Hotel experiences an overabundance of subplots. There are instances where certain characters fail to be addressed for over 15 minutes and it becomes difficult to connect with them. Similar to another British comedy, Love Actually, clearly the film would have been better served by ditching a lesser developed character or two and centering solely on the necessary ones. Furthermore, by continually forcing specific story-lines into the feature, the movie begins to drag during its closing moments. Thankfully, Madden doesn't allow the film's resolution to draw out too long and he manages to salvage the movie.

The Best Exotic Marigold Hotel is a laugh out loud and heartfelt piece of work. Madden does a spectacular job of keeping the film balanced and effective. Despite the feature's predictability and minor sense of a fairy tale ending, the movie is a feel good experience that can easily be enjoyed by all types of audiences. In what could become a possible Academy Award contender, The Best Exotic Marigold Hotel is, unquestionably, a film worth seeing.