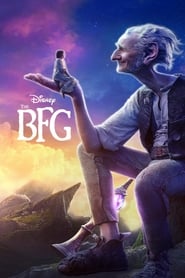 Stephen Spielberg is a filmmaker that needs no introduction. The two-time Oscar-winning director boasts a never-ending list of credentials that extends well beyond his most acclaimed classics like Saving Private Ryan, Schindler's List, Raiders of the Lost Ark and Jaws. And with today's release of Spielberg's massively anticipated adaptation of Roald Dahl's children's tale, The BFG, he adds another successful title to his long, storied career.

Sophie (Ruby Barnhill) is a young orphan living in London who suffers from a self proclaimed bit of insomnia. One evening, while wandering around the orphanage at all hours of the night, she encounters a lovable giant named BFG (voice of Mark Rylance) dancing along the streets outside her bedroom window. BFG snatches Sophie from her room and introduces the girl to a secret world of other giants and the whimsical source of all our nightly dreams.

Based on the source material alone, The BFG is a story that's truly suitable for audiences of all ages. Couple that with masterful direction through the singular eye of legendary filmmaker, Steven Spielberg, and you've got an instant-classic. In fact, I'll go out on a limb and declare The BFG as Spielberg's finest film since his 2002 crime comedy, Catch Me If You Can. It's his majestic perspective that magnifies an already solid tale filled with grand visual effects and a charming adventure. Mark Rylance, who won an Oscar himself at the hands of Spielberg's Bridge of Spies just last year, provides the voice and soul behind the titular character. Yet, it's the exceptional turn by youngster Ruby Barnhill that brings the entire film together. Her delivery is organic and fits the role extremely well. With so many shining qualities surrounding The BFG, Spielberg offers another stunning effort.

It's difficult identifying glaring faults to the film, but I will admit that I was slightly underwhelmed by the children-eating giants who oppose BFG. They are necessary to the story and certainly serve their purpose, but their inclusions in the film is rather unfulfilling. Furthermore, there are a few sluggish moments spaced far apart in this long but otherwise engaging journey. While The BFG has a few minor blemishes, they pass along fairly unnoticed thanks to an abundance of other amazing attributes.

Steven Spielberg's The BFG is a wonderful adaptation that's enjoyable for the entire family. Bursting with humor, heart and energy, there are so many special components that make this film worthwhile. You won't find another film in theaters that will top Spielberg's The BFG, so heed my advice and check it out, you won't be disappointed.