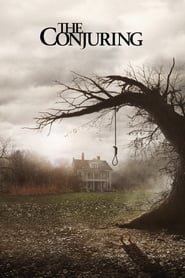 James Wan is a horror enthusiast, plain and simple. The director of the original Sawand Insidious has spent all of his rather young career refusing to break from the norm. He's arguably as dedicated to his craft as any other director out there. The only problem being that his craft comes in the form of horror movies. A genre that's often disregarded and kicked to the curb as if it were a piece of trash on the street. As a horror director, it proves difficult to garner the appropriate attention that you may actually deserve. Well finally, after years of providing quality scares to audiences all around the world, James Wan's The Conjuring has become the main attraction.

The Conjuring follows the real life story of famed paranormal investigators Ed and Lorraine Warren (played by Patrick Wilson and Vera Farmiga) as they work diligently to help rid the Perron family of an evil and demonic presence that's terrorizing their newly purchased farmhouse.

While it's easy to write off such a bland and generic premise to a scary movie, it's a simplistic approach that actually helps Wan's latest effort resonate so well with moviegoers. Much like the horror classics that I grew up loving such as John Carpenter's Halloween, Wan has finally begun to realize that sometimes it's a lot scarier to give a little less. And as a result, The Conjuring succeeds by allowing the audience to frighten itself. In his similarly based earlier work, Insidious, Wan showed a lot of promise with his attention to key horror elements such as sound, suspenseful build-ups and successful timing. However, where he shows a dramatic improvement over his earlier paranormal effort is in his restraint. With Insidious, Wan demonstrated a lackluster need to give an overly detailed and contrived explanation for the evil presence in the film. An unnecessary but often forced fatal flaw for many scary movies. Yet, in The Conjuring, the director shifts his focus from the origins of the demon to the characters themselves, and it pays off handsomely.

Now, for as much as I thoroughly enjoyed The Conjuring from start to finish, there are a few issues that arise with the film. For example, there aren't many distinct differences between James Wan's newest release and the other dozens of paranormal movies that have found their way to the big screen over the last decade. It's a difficult sub-genre to find a sense of originality. But despite the deja vu feeling that you've seen plenty of the same before, The Conjuring elevates its game by crafting meaningful characters and offering a solid collection of fine actors and actresses. The performances aren't groundbreaking, but they're all stellar and convincing enough to carry the film. Moreover with The Conjuring's diluted sense of originality, Wan tries to mimic the the comedic elements from last year's horror release The Cabin in the Woods. Characters such as the Warren's helper Drew and the police officer Brad are both meant to lighten the mood at times. I didn't find them to be necessary to the film at all and Wan could have done without them. However, The Conjuring ultimately leapfrogs all of the blemishes surrounding its creative shortcomings and wins the audience over with its clever scare tactics and strong performances.

Let me be frank, this is by no means an amazing film. In fact, most horror movies aren't. But if you enjoy a good scare and you can tolerate some of the awful talkers and laughing-to-hide-their-fear people that are guaranteed to flock to the theatre for this one, then I highly recommend taking a chance with The Conjuring. It's well paced and delivers some really interesting special effects that are worthy of praise. With high expectations, even I wasn't disappointed.