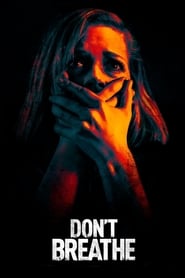 The horror genre has been exploding recently. James Wan has taken haunting and possession films to a whole new level while an impressive string of clever premises have surfaced in films like The Babadook, It Follows, Lights Out and Fede Alvarez's new endeavor, Don't Breathe. Alvarez is best known for his 2013 gory and visceral remake of the genre classic Evil Dead. While he tones down the violence in his latest work, he still develops another winning recipe that propels him among the best contemporary horror directors.

On the mean streets of Detroit a trio of friends earn their money through a seemingly flawless burglary scheme. And when news breaks of a secluded and blind war veteran sitting on a king's ransom, Rocky (Jane Levy) sees the opportunity as her way out of town. But on what's supposed to be their final robbery, they unlock a sinister secret and a freakish nemesis who refuses to let them make it out alive.

There's an unruly tension caked beautifully into Don't Breathe's moments of deafening silence. Fede Alvarez has mastered the art of suspense and uses it to perfection in this slightly tamed horror effort. Jane Levy proves to be a more than capable leading star as the genre's iconic damsel in distress. And while the scares are effective and the performances are adequate, Don't Breathe suffers greatest in its flawed writing. Timely conveniences and plot holes are to be expected in horror movies, and they are certainly evident here, but it's the film's overbearing and everlasting finale that disappoints the most. An endless game of cat and mouse ensues to a somewhat predictable conclusion, one less impactful and safer than I was rooting for. As advertised, there's a bit of a twist within the film and it adds a deeper and more gruesome element to the story. There are a handful of just utterly vile moments, not necessarily gory or violent, just flat-out gross. But if you're looking for some solid scares and exceptional suspense, Don't Breathe certainly won't let you down in that regard.