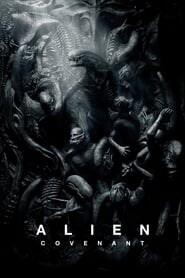 For as puzzling and ambiguous as Ridley Scott's long awaited return to the Alien franchise was with 2012's prequel, Prometheus, the symbiotic relationship between filmmaker and sci-fi saga still rang true. And a handful of years since that release, Scott dives back into the unfriendly confines of outer space with the follow-up, Alien: Covenant. With similarities and differences abound, Covenant fully embraces its predecessor while unveiling its purpose with a massively altered approach.

A colonization mission is under way on the spaceship known as Covenant. But when an unforeseen issue awakens many of the vessel's passengers from their sleep chambers, they soon discover an Earthly signal from nearby inhabitable planet. They change their course for this mysterious land and soon discover that the superficial paradise they hope to call home is anything but a utopia.

If there's one thing I loved about Covenant, it's Ridley Scott's commitment to the same horror elements that made his 1979 original so transcendent. The dark depths of outer space are as frightening as they are exciting, and this film embraces that notion with an immensely gory take on the sci-fi genre. The film is filled with both strong and unappealing performances. Thankfully, its leading stars, Michael Fassbender (in a brilliant dual-role) and Katherine Waterston, offer fantastic turns that help propel Covenant into one of the finer big-budget horror films in recent memory. Ridley Scott has seen a fair share of awards season success and critical bashing over his long run as a filmmaker. And although we won't see Covenant's name resurface when major nominations are handed out later in the cinematic year, countless lasting images from the film reaffirm the director's exceptional abilities as a unique visionary.

Where Prometheus poses many more questions than answers it provides, Covenant scraps the cryptic formula for an overly-direct storytelling approach. It's an irritating overcompensation that spells out far more than what's necessary to the viewer. There's a sweet-spot somewhere in between the manner in which this new film and its predecessor handle the mystery and intrigue that makes Alien such a compelling franchise. And while I prefer this sequel in comparison, mainly for its horror-rich infusion into the plot, there are a few clear deficiencies that can easily be corrected to make any future installment an absolute masterpiece.

For as mediocre as 2017 has been so far, Covenant makes for one of the stronger titles in the first half of the year. Expect a more visceral and blood-filled sci-fi adventure than Prometheus, and one that addresses its predecessor closely, all a while harboring a tone similar to the 1979 original. Ridley Scott hasn't quite perfected his re-branding of this classic franchise, yet Covenant is clearly a huge step in the right direction.