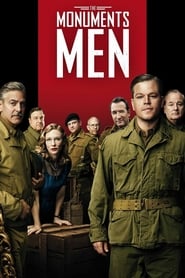 George Clooney is one of the most prominent figures in Hollywood. As an Academy Award winner for both acting (Syriana) and producing (Best Picture winner Argo), many believed Clooney had a strong chance at pulling off the trifecta with a potential Best Director win for his newest film, The Monuments Men. However, that was before post-production issues delayed the feature's release until 2014. Unfortunately, we now know that The Monuments Men is light-years away from the prototypical Oscar Nominee.

Clooney stars as Frank Starks, an art historian who makes a pitch to the president of the United States during the closing months of World War II about preserving all of the various artwork spread throughout Europe and returning it to its rightful owners. After being given the green light, Starks enlists six other museum directors, curators and art historians to help him see this mission through. Yet, this group (known as "The Monuments Men") must stare the dangers of war in the eyes and overcome countless obstacles along the way.

Clooney's latest effort has been panned by critics for a multitude of reasons. I wouldn't be the first to address the movie's problems with developing distinct tonal differences between comedy and drama, or even the condescending lecture-like dialogue intended to force the audience into accepting the importance of this mission, rather than making us "feel" something. There's a huge disconnect between film and viewer, something that can never work for a project of this type. Consequently, The Monuments Men is nothing more than an elongated and mediocre fluff piece filled with a strong cast, but weak and ineffective narrative.

Although The Monuments Men never escapes its stagnant vibe, it's an interesting premise that remains mildly entertaining at the hands of many fine performances. However, the long list of great actors in the film are required to make the most out of thinly crafted characters. But while the film hopes to elicit suspense and emotion, The Monuments Men instead outstretches minimal plot progression to a near two-hour running time. With the superficial makings of a compelling and moving examination of an inspiring true story, even Clooney's admirable direction fails to aid a brutally developed screenplay.

There are a few shining moments sporadically peppered throughout The Monuments Men, but they become quickly overshadowed by all of the film's shortcomings. As a viewer you never feel transported into the story, rather just a spectator to its events. And ultimately, the truly great films know how to differentiate between the two and execute effectively. Illustrating that The Monuments Men is nothing more than an occasionally entertaining run-of-the-mill effort from mega-star George Clooney.