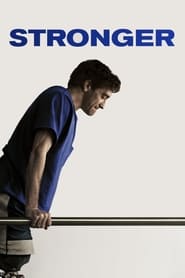 Less than a year ago Peter Berg, a director increasingly known for tackling events from recent history, delivered a tense and thrilling recreation of 2013's Boston Marathon bombing and the subsequent days-long manhunt for the suspects at large with Patriot's Day. The film was effective but lacked a subtle and more personal feel to the Boston-Strong tragedy that rocked the world. Yet, nearly nine months later we're given just that perspective from a mildly unexpected source. David Gordon Green, an indie filmmaker who finally broke through with his 2008's stoner-comedy Pineapple Express, finally returns to his dramatic roots. Stronger tells the emotional true story of Jeff Bauman, a bombing victim who struggles to come to grips with the debilitating results of this tragic event.

Jeff Bauman (Jake Gyllenhaal) is an unreliable and immature jokester living in the Boston suburb of Chelmsford. And when he runs into his long-time on-and-off girlfriend Erin (Tatiana Maslany) at a local bar trying to raise money for the marathon, he promises to be there at the finish line to cheer her on as she finishes the race. But Jeff's decision to finally come through on his promise leads to the greatest struggle of his life when he losses both of his legs in the bombing and reluctantly becomes a hero to the entire city of Boston.

David Gordon Green's Stronger grips its audience with a compelling character-driven story that's eloquently brought to the screen by Jake Gyllenhaal. The actor's storied career adds another shining inclusion to his already long list of achievements as Gyllenhaal delivers the year's most notable performance to date. But for as masterful as Gyllenhaal is on screen, co-star Tatiana Maslany complements his work with an earnest and skillful turn of her own. Stronger tells a nuanced story that's thin on memorable scenes but effective because of its refusal to cater the the heart-tugging backdrop of its over-arcing tale. The film's undeniable dramatic moments are supported by laugh-out-loud humor courtesy of Jeff Bauman's family members, which add a layer of depth to the entire experience. Stronger isn't anything exceptional, and it may not even end up in the Best Picture field, but David Gordon Green shows why he's a capable storyteller and exemplary filmmaker.