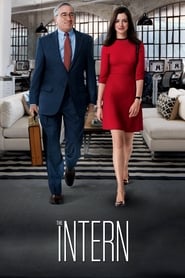 One of the films opening this weekend is The Intern, the latest comedy from It's Complicated director Nancy Meyers. With an A-list cast featuring Academy Award winners Robert De Niro and Anne Hathaway, this fluff piece regrettably falls a little short of initial expectations.

After a brief stint with retirement prompts Ben Whittaker, a 70 year old widower, to apply for an internship with an online fashion website, he's selected for the position and assigned to personally assist their company head, Jules Ostin (Anne Hathaway). And as Ben closely observes his overworked boss, he slowly convinces her that he can be a valuable asset to the company, and more importantly, a loyal friend.

The Intern works tirelessly to blend together legitimate laughs and earnest drama. Yet, while the film succeeds from a comedic standpoint, its emotional core feels forced and insincere. With a running time just north of two full hours, The Intern finds itself massively outstretched and completely dismantled by a deplorable third act that's overacted by the film's leading lady, Anne Hathaway. The movie's best moments come at the hands of its supporting stars. Unfortunately, they aren't enough to maintain a winning formula.