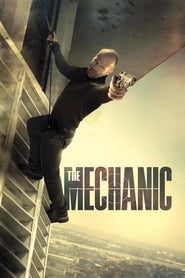 Combining one of the most type-casted actors (Jason Statham) with one of the most underrated young actors (Ben Foster), The Mechanic is definitely an intriguing film. Director Simon West, best known for Con Air, once again tries tackling the action genre with this remake. And yes, I said remake. As you may not have known, the original The Mechanic (starring Charles Bronson) came out in 1972, and was generally enjoyed by the public audience. Nowadays, the "remake" tag seems to be a death wish (no pun intended for and Charles Bronson fans) for new releases. Truth be told, I've never seen the original. However, if 2011's The Mechanic is starring Ben Foster, how bad can it be?

Arthur Bishop (played by Statham) is a hitman. Just don't tell him that. Bishop refers to himself as "a mechanic". A man who fixes situations. Precision is his job, but it becomes difficult when the reckless Steve McKenna (played by Foster) wants Bishop to teach him the trade. Since Steve's late father, Harry McKenna (played by Donald Sutherland), was Arthur's mentor, it's difficult for him to refuse. While Steve learns all the tricks of the trade, Bishop has some discoveries of his own. After completing a difficult job, Arthur finds out he was mislead by his employer. Desperate to seek vengeance, Steve and Bishop attempt to settle the score.

Entertaining to the core, The Mechanic offers great action sequences and strong acting. With a mere 92 minute runtime, the film flows nicely. Never boring or drawn out, Simon West once again crafts an easy watch. However, you always have to take the good with the bad. Keeping the film short and to the point, The Mechanic contains a few noticeable holes in the plot. Furthermore, Steve's transformation from a rugged young man to a legitimate hitman seems to happen instantly. Showing the audience Steve's development into a meticulous killer would have been an interesting angle, yet Simon West fails to do so. At its conclusion, it's evident that Foster and Statham's solid performances couldn't blanket all of The Mechanic's mistakes. If you're a true fan of the action genre, there's plenty to enjoy here. However, if you're looking for a stellar plot and a well crafted picture, this certainly isn't it.