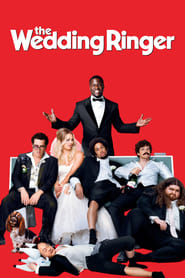 When it comes to movie theater selections after the turn of the new year, January is known for pitting the major Oscar contenders against fluff-films that come and go without much notice. Yet, most people are completely aware of the newest Kevin Hart comedy, The Wedding Ringer. Since Hart, a piece of contemporary comedy gold, usually doesn't fly under the radar very well, let me be the one to temper expectations for his latest go-around with debut director, Jeremy Garelick.

When chubby loner Doug Harris (Josh Gad) lands a fiance way out of his league, a series of little white lies put him in desperate need of a best man and 7 groomsmen. Luckily for Doug, Jimmy (Kevin Hart) provides exactly the type of service he requires and is willing to be the first to successfully pull off what his industry calls, "The Golden Tux" (a pseudo wedding party of this size). Now, if only Doug, Jimmy and 7 other strangers can buckle down and get their cover stories straight, this crazy bunch of misfits will actually have a shot at pulling off a historic wedding day mirage.

The Wedding Ringer helplessly falls into the "easy to get to get through, but nothing special" catalog. Its humor is consistent throughout, albeit far too over-the-top at times, and the acting is decent enough for a film of this scope. I've been a longtime fan of Josh Gad as he continues to deliver endearing characters with such jocular precision. However, a forced finale that's clearly hinted at, but lacking in proper writing and execution, ultimately reduces this absurdly-premised comedy to a mediocre result.