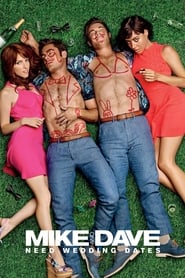 The summer blockbuster season is known for its action-packed catalog filled with superhero sequels and eye-popping special effects. Yet, the summer time also stands as a platform for many of the year's funniest comedy films. And although I held a little hope that Jake Szymanski's debut major motion picture Mike and Dave Need Wedding Dates would be that standout comedy release, unfortunately it's nothing more than a combination of poor acting and unnecessary amounts of vulgarity.

After a pair of hard-partying brothers, Mike and Dave (Adam Devine and Zac Efron), are forced to avoid going stag to their sister's upcoming wedding in Hawaii, their search for dates becomes a viral sensation. Meanwhile, low-life alcoholics and recently unemployed roommates, Tatiana and Alice (Aubrey Plaza and Anna Kendrick), catch wind of the story and put on their most respectable faces in hopes of cashing in on a free trip. While their deceptive plans work, perhaps these four clueless idiots are exactly what's needed to make the bride's perfect wedding come to life.

For starters, there are sporadic laughs scattered all throughout the film. However, the humor isn't nearly consistent enough to outshine a poor storyline and unusually inadequate acting from some young talents I've praised in the passed. I had a difficult time figuring out if these shortcomings were due to misguided direction or weak characters. Either way, Mike and Dave Need Wedding Dates is a long-winded 95 minutes that fails to win over audiences with dimwitted humor and enough f-bombs to put Scarface to shame. Just to be clear, the film isn't unbearable but it's wildly mediocre. So if you're on the lookout for this summer's breakout comedy feature, I suggest you keep looking.