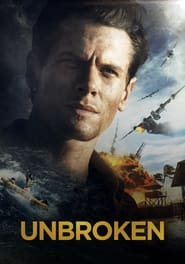 Perception and reality are two completely different things. And unfortunately for Angelina Jolie's once-upon-a-time Oscar frontrunner, Unbroken, reality has officially set in. Based on the remarkable true story of an Olympic runner turned prisoner of war during the course of World War II, an adapted screenplay by the Coen brothers had all of Hollywood buzzing about the film's potential. Sadly, though, Unbroken culminates as little more than a "what could have been" experience.

Growing up as a trouble-making youth in California, Louis Zamperini (played by Jack O'Connell) is recruited to join his school's track team by his brother Pete. Louis goes on to compete in the Olympics as a distance runner and breaks the official record for the fastest final lap time. Years later he ends up as a member of the U.S. Air Force, where a failed recovery mission lands the soldier and a few of his crewmates lost at sea for a nearly month an a half. After being spotted by a Japanese vessel in the middle of the ocean, Louis is transferred to a brutal internment camp where he's pushed to physical and psychological limits by the prison overseer Watanabe (Miyavi).

I've heard countless recollections of the impressive story told throughout Laura Hillenbrand's biography of Louis Zamperini. What's more surprising, however, is how empty Angelina Jolie's sophomore effort, Unbroken, feels. After a rapid introduction that never adequately develops the constantly harped-on relationship between Louis and his brother Pete, it becomes quickly apparent that almost all subplots will be ignored. Instead, Jolie takes the audience on an abusive-centric ride battered with religious undertones. In a Christ-like manner, Louis welcomes the punishment on such a regular basis that you almost become desensitized by the beatings, and unphased when the prisoner is able to withstand more torture than his villainous nemesis, Wanatabe, can physically offer. And throughout this unnecessary and visceral brutality, a depth-less screenplay by the usually reliable Joel and Ethan Coen submits to this unjustifiable mishandling of a truly heroic tale.

Of all the clear blemishes made visible throughout Unbroken, one bright spot does reside in the film's leading star. Newcomer Jack O'Connell gives a fully committed performance and does the best he can with what he's been given. Yet, rudimentary dialogue and a one-dimensional vision from the movie's high-profile director overshadow an otherwise valiant portrayal from O'Connell, leaving Unbroken as a hollow and unworthy potential Oscar contender.

It's generally a curse being thrusted into the early spotlight of awards season, and Jolie's latest effort is no exception. Elevated expectations only make matters worse for this devastatingly run-of-the-mill film. Yes, you'll witness the heroism and struggles that Zamperini is forced to endure, but you'll leave the theater far more curious about the ramifications of his experiences and what happens next in his life. I guess I'll have to turn to Hillenbrand's biography for those answers.