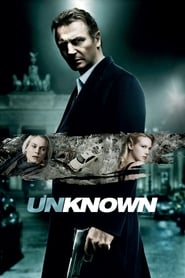 While feeling slightly incapacitated this past weekend (due to septum and sinus surgery), I decided to pass the time by catching the latest action thriller to hit theatres, Unknown. Despite it's mixed reviews, I was very excited to see the film's star, Liam Neesom, perform in his first major action role since 2009's Taken. I found Taken to be a true action gem, and I had high hopes for 2011's first notable action feature.

Unknown follows Dr. Martin Harris (played by Neeson) and his wife Elizabeth (played by Mad Men's own January Jones) as they arrive in present day Berlin. Dr Harris has flown to Europe in order to be a key note speaker at a convention in the german city. When they arrive at their hotel, Martin sends his wife to check in and he discovers he's left an important bag at the airport. He hails the next cab he sees and makes his way back. An unforeseen event causes a major car crash that sends Dr Martin's cab off a bridge and into a river. Gina (played by Kruger), the cab driver, rescues the unconscious doctor as he is then rushed to a nearby hospital. When he awakes from a four day long coma, he convinces the physician to sign his release so he can find his wife. Once Dr Martin spots his wife at their hotel, he approaches her but is shocked by her claim. Elizabeth tells hotel security she has never seen him before in her life and another man presents proper identification as the real Dr Martin Harris. Clouded by foggy memories, the crash victim sets out to discover the truth.

For starters, Unknown is a long, drawn out affair. With a near two hour runtime, the action film loses it's appeal. The plot has countless holes and the director struggles to adequately piece the puzzle together. Much less appealing than his previous film Taken, Liam Neeson's strong acting is one of the few bright spots in Unknown. Diane Kruger and January Jones are far from convincing with their supporting roles, and it ultimately leaves the picture feeling unfulfilled.

On the contrary, there are a few notable aspects to Collet-Serra's Unknown. A very clever twist is introduced about an hour and 25 minutes into the film. The closing scenes of the movie are strong and the ending is solid. However, the lead up to the well written twist is slightly confusing at times and much too spotty. Despite its cleverness, the film ends up feeling as though it outsmarts itself. There are too many loose ends and contradictions in the plot and dialogue to appreciate the well written conclusion.

I am by no means an action junky. Nor will I ever claim to be. Perhaps my uncomfortable state of mind (due to the surgery) had an effect on my opinion of the film, but I personally couldn't stop looking at my watch. I was far from entertained and extremely disinterested for a greater portion of the movie. However, I must note that out of the four others who saw the film with me, three enjoyed it and one did not.