Review | Us and Them
Search 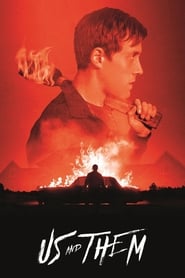 Us and Them
Movie Critic Dave's Ratings
Stars

Without getting overly political, it's impossible to ignore the growing divide between the wealthy and the working class in developed nations all across the globe. Such an observation serves as the core principle behind Joe Martin's feature film debut, Us and Them. This SXSW selection also stars newcomer Jack Roth, son of Quentin Tarantino regular Tim Roth (Pulp Fiction, Reservoir Dogs and The Hateful Eight), in a diabolical role that shows the apple doesn't far from the acting tree.

Danny (Roth) is a bitter and frustrated working class Brit who's fed up with the class warfare that plagues society. So he and a pair of accomplices conjure up a plan to get back at the wealthy elite by holding a prominent banker and his family hostage and broadcasting the entire ordeal over social media, in hopes of starting a political revolution. Yet, things fall apart quickly when Danny's helpers begin to deviate from his big-picture objective.

Joe Martin's Us and Them represents a worthwhile achievement that benefits most from its clever non-chronological storytelling and a brilliant lead performance from Jack Roth. Told through multiple chapters, the film offers laugh-out-loud British wit to complement its thrilling kidnapping tale. In its brightest moments, the film rings reminiscent of iconic Guy Ritchie works like Snatch and Lock, Stock and Two Smoking Barrels. However, writer and director Joe Martin eventually loses sight of his overriding voice on the focal point of the feature, watering down his once-poignant socio-political message. However, Us and Them still manages to impress with its unpredictable characters and an unforeseen resolution that ties a satisfying bow on the debut feature.