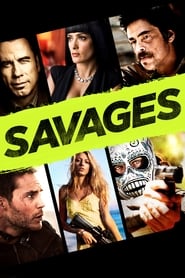 Academy Award winning director Oliver Stone only has one word in the back of his mind while making a film, and that word is "epic". As the director of Platoon, Born on the Fourth of July, Natural Born Killers, and the Wall Street movies, to only name a few, Stone has branded himself as one of Hollywood's biggest names. Known for his visions of grandeur, Stone has returned in 2012 with Savages, another big time film filled with an all-star cast from top to bottom. And after a somewhat mediocre stretch of releases over the past decade, we've finally got the Oliver Stone of old.

Savages centers around an unlikely trio of lovers Ben (played by Johnson), Chon (played by Kitsch), and O (played by Lively). Ben, a Berkley grad and Buddhist with a knack for growing the best marijuana on the planet, and his lifelong best friend Chon, a fearless and tainted ex-soldier from the Afghanistan and Iraqi wars, find themselves in a dangerous situation when the Mexican drug cartel wants their product. After the duo refuses to do business with the cartel's leader Elena (played by Salma Hayek), she sends her enforcer Lado (played by Benicio Del Toro) to kidnap their common girlfriend and force their hands. Desperate to save O from enslavement, Ben and Chon must go to outrageous lengths to free their lover and survive the ordeal.

Savages is a full-throttle adrenaline rush that makes for an entertaining ride. Nothing short of intense from start to finish, director Oliver Stone delivers another winning effort to add to his illustrious credentials. Insanely violent and sure to stir up some anxiety, Savages succeeds on countless levels. For starters, Stone conjures up a once in a lifetime cast that undoubtedly helps elevate the film to a whole other level. Aaron Johnson is as superb as ever and Kitsch and Lively give no reason to lose interest in the story. And as convincing as its trio of lead stars are, Savages benefits most from its secondary cast. Benicio Del Toro steals the show as Lado, the head of the cartel's most capable goon. Del Toro is absolutely ruthless and makes for one of the most memorable onscreen villains of all time. Other notable casting decisions come in the form of Salma Hayek, John Travolta, Emile Hirsch, and 2012 Best Actor Nominee Demian Bichir, all of which give excellent performances and propel Savages to another level. In addition to the film's brilliant casting, I must compliment Stone for his phenomenal directing job and the entire collection of writers. Savages is not only a suspenseful and serious journey, it has a strange aura of dark comedy and a lighter side that enables the movie to progress with ease. It's remarkably unique in the sense that you'll cringe while watching a brutal torture scene and then find yourself simultaneously chuckling at little nuances of the characters. Savages is both clever and original, making it one of 2012's most exciting films of the year.

Despite it's overwhelming amount of highlights, Stone's Savages fails in one major area. The feature's ending is anger inducing. After watching the movie I read an interview with Stone where he attempts to explain his rationale for the film's closing scenes, and his explanation was unjust and idiotic. By wrapping up Savages in the manner he does, Stone shows disloyalty to the natural flow of the story. For roughly two hours Stone has the audience in a trance and hooked whether they like it or not, only to allow the whole experience to unravel in a pigheaded way. It's truly a shame, because Savages ultimately suffers and never feels as complete as it should.

As Oliver Stone likes to do, he once again pushes a piece of work over the two hour plateau. However, due to a fine screenplay and top-notch performances by Del Toro, Johnson, and company, Savages keeps a masterful uptempo feel and remains highly engaging throughout. And despite a butchered ending, Stone still manages to return to classic form and offer up one of 2012's best efforts. If you enjoy dangerously high levels of intensity and you think you can stomach the violence that I promise you is there, get to theatres and check out Savages. It's a wild ride.