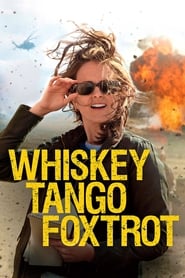 Directing duo Glenn Ficarra and John Requa have flown under the radar for quite some time. They launched their collaborative filmmaking careers with 2009's clever con-man comedy, I Love You Phillip Morris, only to follow it up with the well-received 2011 laugher, Crazy, Stupid, Love. and last year's less impressive effort, Focus. With a speedy turnaround, Ficarra and Requa return early in 2016 alongside SNL alumnus, Tina Fey, in the adapted true story, Whiskey Tango Foxtrot.

Kim Baker (Fey) struggles accepting the mundanity of her life as a journalist tackling low-profile stories. And when the opportunity arrives to report from the front lines in Afghanistan, she packs her suitcase and tells her boyfriend she'll be back in three months. Initial doubts regarding her reactionary decision quickly fade as Kim forms friendships with a fellow reporter (Margot Robbie), a freelance photographer (Martin Freeman) and her Afghan translator (Christopher Abbott).

Once again Glenn Ficarra and John Requa deliver a winning effort with their wartime dramedy, Whiskey Tango Foxtrot. Although the film is a slow-crawling and over-extended affair, it really stands as an acting showcase for leading star, Tina Fey. I've been mightily unimpressed by Fey's filmography to date, but she seizes complete control of the movie and takes a big step forward in her career. A powerful connection between Kim Baker and the audience becomes inevitable, but Whiskey Tango Foxtrot succeeds even further thanks to wonderful supporting turns from Christopher Abbott and Martin Freeman. Abbott was a festival darling for last year's James White and backs up the beloved performance with a valuable turn here. Whiskey Tango Foxtrot isn't the most entertaining or clever film, but it's a story about people and its executed very well thanks to a remarkable collection of actors and actresses.