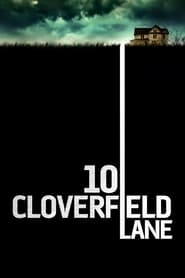 There's such a peculiar backstory surrounding Dan Trachtenberg's debut motion picture, 10 Cloverfield Lane. What began as a psychological thriller with the working title, The Cellar, the screenplay went through some minimal changes to link the idea to 2008 release, Cloverfield, as Trachtenberg took control of the film. Then, executive producer, J.J. Abrams, worked diligently to point out that this wasn't a sequel, but rather a new and singular story operating in a similar cinematic universe as its 2008 monster flick namesake. Therefore, anyone expecting a closely tied film is sorely mistaken, because 10 Cloverfield Lane proudly stands as a unique entity.

Running away from a seemingly rocky relationship with her boyfriend, Michelle (Mary Elizabeth Winstead) hops in her car to move on from him both literally and figuratively. Yet, a vicious car accident knocks Michelle unconscious and places the young woman in an underground bunker overseen by Howard (John Goodman), a doomsday prepper who informs her that there's been a chemical attack and they can't leave the shelter. Another third survivor, Emmett (John Gallagher Jr.), confirms Howard's unsettling claims, all while Michelle struggles to determine whether she's being held captive in the bunker or if a darker threat lurks outside.

A select amount of praise is in order for local product and debut director, Dan Trachtenberg. The Temple alumnus transforms an unnecessary branding into a skin-crawling and intense motion picture experience. A cloudy element of mystery drifts effortlessly throughout the film and builds beautifully into heart-pounding suspense on the undulating backbone of eerie silence and boiling character outbursts. John Goodman is perfectly cast as a charismatic and unstable gun-wielding authoritarian of the bunker. And Goodman's counterpart, leading lady Mary Elizabeth Winstead, makes the most of her rare starring opportunity. As a supporting actress extraordinaire with a long list of wonderful work, the audience clutches onto Winstead's character and embarks on a Twilight-Zone-esque journey that clearly separates 10 Cloverfield Lane from its 2008 titular film.

Despite the successful execution of this newest entry's tense psychological elements, 10 Cloverfield Lane suffers in a few obvious areas. Less detrimental are the raw dramatics moments shared by shelter dwellers Michelle and Emmett. Their hokey backstories play far too important of a role in the overall scope of the feature. Furthermore, there's a more serious problem with the movie's final 15 minutes. An unwarranted and misguided attempt at linking the 10 Cloverfield Lane to its brand results in a disappointing sci-fi filled finale that doesn't fit to the modus operandi. Such a decision sabotages the tone of the film and deteriorates a well crafted piece of work up until that point.

Considering we've just reached March and Hollywood doesn't have much of a track record when it comes to the quality of early year releases, 10 Cloverfield Lane does a fine job of entertaining audiences. It will win you over with a gripping and unwavering intensity that flows throughout the film. However, a poorly constructed conclusion leaves, what would have been, The Cellar as a great film, and 10 Cloverfield Lane as merely a good one.