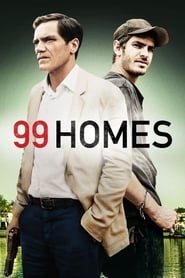 After nearly a year-long stint on the festival circuit, Ramin Bahrani's indie drama, 99 Homes, finds a theatrical release on September 25th. With a detailed and sinister examination of the housing market collapse and its immediate aftermath, 99 Homes is an eye opening and powerful piece of filmmaking from Bahrani.

After falling behind on the mortgage payments to his family's home, contractor Dennis Nash (Andrew Garfield) is ordered by a judge to evict his home. Struggling to find work, Nash crosses paths with real estate broker Richard Carver (Michael Shannon) who takes the single father under his wing and shows him the ropes to corrupting the system. Forced to perform the same eviction practices that he once experienced himself, Nash must choose between compromising his morals and providing for his son and mother (Laura Dern).

Despite a shaky first act that feels flooded with unconvincing dialogue and preachy undertones, 99 Homes quickly unravels into a morality tale that works on various levels. Andrew Garfield and Michael Shannon give top-flight performances that serve as a backbone to an escalating tale of fraud and misconduct. The film illustrates an earnest, albeit bleak, portrait of the housing market collapse that swept across our country throughout the end of the last decade. The dramatics are genuine and the feature is paced extremely well for a two-hour affair. 99 Homes isn't going to dominate this year's awards season, but it proves to be a worthy fall release that captivates audiences and tells a harsh, but necessary, story.