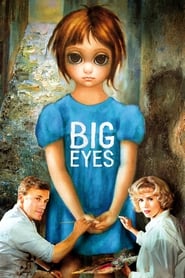 As the cinematic year rushes towards its finale, the Oscar buzz surrounding Tim Burton's latest endeavor, Big Eyes, has certainly faded. While Amy Adams, a perennial awards season name, stands as the film's most likely contender, even she finds herself with a bit of a hill to climb now that Jennifer Aniston (Cake) has valiantly postured for that coveted fifth and final spot in the Best Actress race. Although I can't speak on behalf of Aniston's performance, mainly because her festival circuit film has somehow eluded me this year, I will say that Amy Adams gives yet another finely tuned and endearing performance in Burton's new true-story tale.

Big Eyes is a bit of a break from the norm for Tim Burton, It's the director's first live-action film since 2003's under-appreciated release, Big Fish, where he isn't featuring his usual sidekick, superstar Johnny Depp. Instead, Burton relies on the talents of two more than capable replacements, Amy Adams and the always phenomenal two-time Academy Award winner, Christoph Waltz. Together the duo bring to life the incredible true story of painter Margaret Keane (Adams) and her decade long struggle to claim credit for her artwork after her then husband, Walter Keane (Waltz), had assumed public responsibility for her nationally beloved "Big Eyes" paintings.

The naivety of Margaret and the borderline sexist time period of the 1950s through the 1960s is captured extremely well and helps set the table for this intriguing story of manipulation. Waltz also delivers a fabulous turn as the charismatic and attention-craved husband who indirectly forces his wife into an ever-growing web of lies. However, Burton's Big Eyes fumbles along this fairly superficial tale at an irritatingly slow pace. And while the story is interesting enough to carry you to the finish line, the level of enjoyment along the way is certainly capped. Furthermore, much like the eyes in Keane's signature paintings, the dramatics in the film are highly exaggerated. Yet, either way, Big Eyes is still a much better representation of the types of film Burton should continue to make.