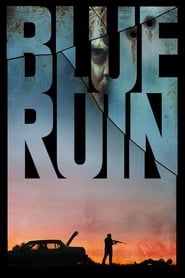 Audiences and press have come to expect an abundance of slow-burning dramas playing throughout the Sundance Film Festival. Park City's movie-mecca is rarely known for dishing out revenge thrillers, but this year they've got one worth flaunting. Director Jeremy Saulnier delivers a taut and hypnotic venture with his directorial debut effort and long-running festival darling, Blue Ruin.

Macon Blair stars as Dwight, a homeless man rummaging through the Delaware shore-line eating out of trash bins and sleeping in his car. His big bushy beard and out-stretched baggy clothes give off a downtrodden and dismal appearance. But when a friendly local officer informs Dwight that a man from his past is being released from prison, the homeless man seeks vengeance against the parolee.

Blue Ruin is a revenge-film done right. Its main character is flawed and perhaps unjust in his pursuit, but you still helplessly root for him. Macon Blair perfectly portrays the odd and few-of-words protagonist. Blair feels like an ideal fit for the role and his excellent performance should certainly pave the way for future roles, but we'll just have to wait and see on the diversity of his skill set. Another welcoming turn comes from Devin Ratray, a 2013 familiar face. Ratray has most recently impressed with his fine work as one of Will Forte's character's twin-cousins in Alexander Payne's Nebraska. Here he plays a war veteran who offers his services to Dwight, a close friend from their days in high school. Despite its collection of fine performances, Blue Ruin also benefits from a well-paced script that offers an abundance gore and violence, an absolute must for any successful revenge-flick.

More than just a crop of stellar aspects regarding movies of its breed, Blue Ruin possesses a strong story with a voice. The film's message of vengeance being a never-ending cycle is brilliantly executed. Writer/director Jeremy Saulnier paints a bleak picture, but it's one that resonates. This somber feature also transcends past the stereotypical bloody revenge-thriller by incorporating a darkly comedic undertone that plays well. Not only does Blue Ruin generate tension and suspense, it's guaranteed to elicit a surprising amount of laughs. All of which play to its favor.

Although Jeremy Saulnier's Blue Ruin is far from unblemished, it's a highly entertaining and extremely engaging feature. Surely it has some weak dialogue and unrealistic situations, but they become easy to overlook in order to appreciate the essence of Blue Ruin.