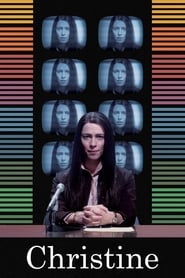 Rebecca Hall has always been one of those under-the-radar actresses who continually impresses despite never landing a true Oscar-worthy role. Yet, that all changed when she struck gold with Antonio Campos' true story Sundance selection, Christine. Recounting the slow downward spiral into madness of a 1970s news reporter who did the unthinkable, Rebecca Hall finds her career-defining role and delivers sheer brilliance.

Christine Chubbuck (Hall) works as a news reporter in Sarasota, Florida who's "always looking for a positive human interest story". Yet, as the industry begins evolving for ratings purposes by sensationalizing darker-themed stories, Chubbuck's desire for a promotion forces her to get caught up in this movement. Coupling this with her lack of a romantic and personal life, Christine's lifelong battle with depression prompts her to step in front of the cameras and make television history.

Antonio Campos' captivating character study represents a platform for Rebecca Hall's exceptional acting talents. She perfectly captures the essence of a bitterly torn individual who, under multiple factors within her life, begins to succumb to depression. Christine is an intelligently-paced ticking time bomb that explodes with an unforgettable finale. A precisely-detailed script accentuates Hall's Oscar-deserving work. It's a wonderfully nuanced performance that undeniably stands as one of the year's finest. Whether or not you're familiar with Christine Chubbuck's true story, this film will have you yearning for more throughout all of its lulls and explosive outbursts.