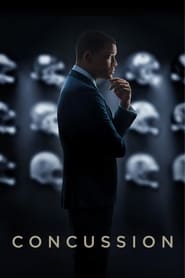 Baseball may be American's greatest pastime, but professional football is our country's sport of the present and the future. The NFL's aura is magnetic, drawing attention to anything branded by its touch. And with Peter Landesman's hard-hitting new drama, Concussion, the NFL's unavoidable allure will be attracting audiences to a true story that refuses to pull any punches on the league's deceptive attempts at masking the facts behind player-safety concerns.

Will Smith stars as Dr. Bennet Omalu, a Nigerian forensic pathologist working as a coroner outside of Pittsburgh in 2002. Dr. Omalu's strict devotion to his craft leads to a startling discovery after performing an autopsy on Hall of Famer "Iron Mike" Webster's body. Examining the football legend's brain, Bennet find that Webster's constant exposure to head trauma released an accumulating protein that, in essence, strangled the brain and destroyed his psyche. But when Dr. Omalu attempts to shine a public light on his groundbreaking research, he's met with a forceful opposition from the NFL who attempts to smear his work.

Through an unmistakable good vs. evil approach, Concussion unapologetically paints a sinister portrait of the National Football League and its current commissioner, Roger Goodell. But what opens as an in-your-face drama that refuses to downplay the severe struggles of every day life for these mentally wounded athletes, Concussionsadly culminates in a recursive plot that fails to reach an enviable climax. However, throughout the story's repetitious nature Will Smith gives his finest dramatic performance in years and remains as a stable bright spot for the feature. Whispers of a Best Actor Oscar nomination circled the film for quite some time, and it would be a justifiable result considering his opposition. Furthermore, Albert Brooks continues to offer exceptional supporting work as this marks another fine turn that will end up overlooked by the Academy. All in all, Concussion's sluggish second half becomes overshadowed by sound performances from its entire cast that help solidify the film as a decent viewing option.