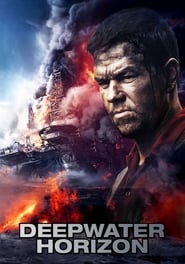 I've been a longtime fan of actor and director Peter Berg. He's demonstrated admirable diversity between his anti-hero comedy, Hancock, and the more dramatic covert ops film, Lone Survivor. And since the 2013 release of the latter film, Berg has seemingly shifted his storytelling focus to the narrow direction of true events, as evident by his latest release Deepwater Horizon. Next on the docket for him is a drama circling around the events of the Boston Marathon bombing. This predictable transformation has me growing more skeptical of the filmmaker than I've ever been before.

Mark Wahlberg stars as Mike Williams, the Chief Electrical Engineer on the massive Deepwater Horizon oil rig nestled in the Gulf of Mexico. With deadlines passing and profits being effected every day, the BP oil company sends executives to the rig to trim down site inspections and improve the delayed timeline. However, system failures culminate in a tragic series of explosions that put the lives of all these workers at risk.

Following a successful string of early reviews, I was rather excited for the opportunity to catch Peter Berg's Deepwater Horizon. Unfortunately, the film trades well-crafted and multi-dimensional characters for cheap sentiments and gaudy pyrotechnics. Offering very little more than a bare-bones story that plays second fiddle to a punishingly long sequence of explosions and special effects that suffocates what little emotion the film has managed to develop. Similar to my response in the review above, Deepwater Horizon only devotes its energy to one real character. Thankfully, Mark Wahlberg delivers a stellar performance that uses a pleasant blend of comedy and drama to generate a strong character. Yet, outside of any rooting interest for Wahlberg's lead character, Deepwater Horizon is a hollow story that never earns the sentiment it so desperately craves.