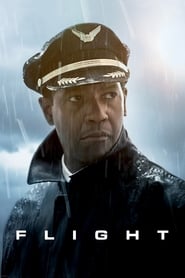 Legendary director Robert Zemeckis lets his credentials speak for themselves. And with a loaded filmography boasting unquestionable hits such as Forrest Gump, Back to the Future and Cast Away, Zemeckis' long awaited return to live action is - as Ron Burgundy would say - "kind of a big deal". His triumphant return comes in the form of Flight, a dark drama about a troubled airline pilot suffering from a severe substance abuse problem. If that wasn't enough to get you excited, teaming up with Zemeckis in the leading role is Academy Award winner Denzel Washington. Now, with all of the proper ingredients securely in place, Zemeckis and company manage to elevate Flight to successful heights.

Denzel Washington stars as divorced airline pilot Whip Whitaker, a full blown alcoholic with an occasional taste for all different kinds of harder drug concoctions. But when a routine flight from Florida to Georgia experiences a disastrous plane malfunction, an under-the-influence Whitaker pulls off some nose-diving heroics that help to soften the crash. Having miraculously saved 96 of 102 lives on board the plane, Whitaker ironically finds himself at the center of a crash investigation. In the midst of a massive downward spiral, Whitaker embattles the possibility of criminal manslaughter charges and, even worse, his destructive substance abuse addiction.

Director Robert Zemeckis' Flight is a well-rounded and emotionally effective character study of one man's personal battle with addiction At the center of the film is Denzel Washington, a gifted actor who needs no introduction. Screenwriter John Gatins serves up a script that allows Washington to take his character's portrayal to some very dark and disturbing places. Almost effortlessly, Washington molds Whitaker's psychologically flawed character into such an alluring and spellbinding anti-hero. Although Whitaker rarely gives the audience any legitimate reason to sympathize with his condition, you'll want so badly for him to put down the bottle when the moments of truth happen to arrive. Even when Whitaker clearly deserves no remorse, Washington demonstrates an uncanny ability to elicit sympathy from the viewer. It's acting at its finest, and I would be downright shocked if Washington wasn't recognized with an Oscar nomination for yet another brilliant on screen display. In addition to the greatness of the film's leading star, actor John Goodman commands every second of screen time given to him. Everything from his perfectly cued grand entrance to his outrageously hilarious final scene, Goodman offers the feature's most likable character. And for as memorable as Goodman's drug-dealing character is, Zemeckis and Gatins never overuse him or rely too heavily on his efforts. As a result, Flight is a crowd-pleasing drama that satisfies at the hands of smart directing and superb acting.

Even though Flight works well as a character-driven drama, Zemeckis' return to live action is far from unscathed. For starters, Flight hits a noticeable lull during its second act which consequently disrupts the flow of the film. The movie begins in impressive fashion with its eye-opening hotel scene followed by a tension filled airplane free fall. However, the film's post-crash middle portion spends a prolonged amount of time focusing on a rather unnecessary character (the drug addict Nicole) and the depths of Whitaker's problems with alcohol. But just as the film begins to recycle itself to the point of exhaustion, Zemeckis returns to the investigation and closes out the film in an emotionally satisfying style. Another significant detraction from Flight is the inconsistencies of screenwriter John Gatins. While carefully-timed comedy has always been a major staple of Zemeckis' more dramatic work, Gatins fails to successfully land a couple of intended "funny scenes". The hospital scene with Whitaker's co-pilot Ken Evans (played by Brian Geraghty) is the perfect example of poorly timed humor. At what should have been a memorable Oscar-type of dramatic scene, Gatins swings and misses at mocking religious fanatics. Although Flight clearly suffers from infrequent interruptions in both mood and plot progression, a worthwhile conclusion makes it easy to overlook and ignore these tiny imperfections.

Once again, Robert Zemeckis gets the most out of his leading star and the payoff is another solid addition to his resume. Denzel Washington deserves all the praise he'll receive on route to a sure-fire Best Actor Nomination by the Academy. Despite his portrayal as a mightily flawed anti-hero, Flight's greatest conquest is how it forces the audience to be forgiving and slightly irrational toward Washington's rather unlikable character. Both highly entertaining and emotionally charged, Flight is far from perfect but still worth the price of admission. Take a shot on Flight and you won't regret it.