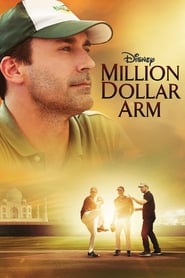 The greatest sports movies find a way to transcend their athletic focus. Films like Rocky transform a deadbeat bruiser for a loan shark into a heavyweight boxing contender determined to "go the distance" with the champ, and Remember the Titans develops a unified high school football team in Virginia during the Civil Rights Movement. With Craig Gillespie's Million Dollar Arm, the unlikely real-life story of the first India-born players to sign major league baseball contracts, tugs at the heart-strings and does an exceptional job of elevating its story beyond the baseball diamond.

Jon Hamm stars as JB Bernstein, a financially strapped sports agent who ventures to the untapped market of India in order to find a pair of up-and-coming MLB pitching prospects. With the assistance of an India-native named Amit who promises to work for free, JB holds a country-wide pitching contest that discovers the potential of two young men named Rinku (Life of Pi's Suraj Sharma) and Dinesh (Slumdog Millionaire's Madhur Mittal). These athletes decide to leave their tiny humble India villages for the first time and travel to the United States determined to master the difficult game of professional baseball.

We're all familiar with "the Disney touch" and its potential to turn an amazing true story into an over-dramatized and sappy affair. While Million Dollar Arm refuses to shy away from the sentiment, it uses an expansive and refined script from Tom McCarthy (director of the overlooked independent film Win Win) to mold together a conflict-filled story of struggle and perseverance. It's a joy watching Jon Hamm excel in his leading role, reminding us all that his talents go well beyond the AMC drama Mad Men. The entire supporting cast earns their label, and the result is a well-balanced blend of comedy and drama. Lake Bell, Aasif Mandvi and Alan Arkin play a delightful second fiddle to Hamm and the rest of the film's stars, creating no shortage of likable onscreen personas.

A remarkable real-life story and brilliant cast propel Million Dollar Arm to praiseworthy heights, however, an overly long running time stops it in its tracks. Scratching and clawing its way to a two hour finish line, the film could have easily shed 20 minutes without losing any of its charm. Instead, we wait and we wait for a predetermined resolve that could have packed a much more meaningful punch if we hadn't laboriously journeyed to get there. But despite the occasional drag and out-stretching the story as far as it will go, Million Dollar Arm succeeds in shining a light on such a truly amazing tale.

It would be an unjustified exaggeration to try and argue Craig Gillespie's Million Dollar Arm among the finest sports movies of all time. Yet, this sincere and heartwarming narrative goes well beyond mediocrity and warrants a viewing. Thanks to a PG rating, Million Dollar Arm is a suitable family film that keeps the laughs consistent and sentiment tolerable.