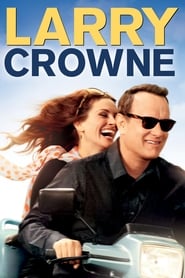 With a filmography very few could compare with, Tom Hanks is unquestionably one of my favorite actors of all time. He's the king of feel good movies, and the man behind one of cinema's most quotable characters, Forrest Gump. Tom Hanks is a living legend, need I say more? Now, some skeptics will question his work of late,but the man's history speaks for itself. On the other hand, I've always found Julia Roberts to be a bit overrated. Needless to say I was a little surprised to hear that the two early 90s stars were teaming up for the Romantic Comedy Larry Crowne. Starring in the film wasn't enough for Hanks, the multi-talented celebrity also managed to write and direct the movie. With all that Hanks going on, how bad could the film be?

Larry Crowne (Hanks) is an aging, ex-naval chef who now works in retail. So when the overachiever finds himself on the chopping block at work because he lacks a college degree, Larry decides to get a fresh start. He enrolls at a local community college and schedules himself for Economics I and a Public Speaking course. Along Crowne's journey he meets Talia who helps transform him into a confident, self assured man. So confident in fact, he's able to attract his Public Speaking professor Mercedes Tainot (Roberts).

Once again, Tom Hanks is able to deliver a convincing performance as the quirky Larry Crowne. Furthermore, Julia Roberts is adequate in her supporting role as Crowne's love interest in the film. In addition to the pair of stars, one of Larry Crowne's most valuable assets is the strength of its cast. There are plenty of noteworthy characters played by Cedric the Entertainer, Wilmer Valderrama (That 70s Show), and newcomers Gugu Mbatha-Raw and Rami Malek. Also as the director, Hanks obviously gets the most out of his actors and actresses.

Larry Crowne is an enjoyable, fun film with plenty of suppressed laughs to be had. It's nothing remarkable, but certainly entertaining with a well constructed story. One noticeable flaw in the film centers around Mrs. Tainot's husband Dean (played by Bryan Cranston). Although I'm a huge fan of Cranston as an actor and I love his hit television show Breaking Bad, his character is poorly crafted and deters from the otherwise natural flow of the film. You're left confused and baffled by any scene his in, and it's quite disappointing. An actor of his caliber could have been utilized in a more meaningful way, proving that there isn't much beyond the surface of Larry Crowne.