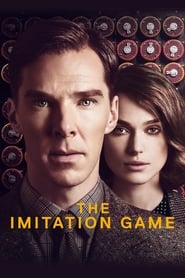 Every year an unexpected film rises out of nowhere and makes its mark on the awards season race. While Morten Tyldum's The Imitation Game hung quietly on prognosticators' radars, none expected it to capture the highly coveted People's Choice Award at TIFF, a recognition that instantly catapults the film into the heart of the Best Picture race. Previous winners of the award include powerhouse titles such as Slumdog Millionaire, The King's Speech, Silver Linings Playbook and 12 Years a Slave, so it's easy to understand the significance of such an achievement. But a larger and more important question continues loom over The Imitation Game, can the film hold off a barrage of Oscar-worthy competitors that are still awaiting their releases?

Brilliant mathematician Dr. Alan Turing (played by Benedict Cumberbatch) is summoned to interview with military officials during the German expansion of World War II. Alan is selected as part of a secretive unit tasked with one important mission, to break the most sophisticated encryption machine the world has ever seen. Understanding that human trial and error has no chance of breaking Germany's Enigma code, Dr. Turing develops an advanced computing machine that helps the allied forces defeat the Nazis and changes the world forever.

The Imitation Game has all the makings of an Oscar-caliber film. Director Morten Tyldum brings to life an amazing true story filled with obstacles and complexities that briskly carry the feature from start to finish. And at its core rests a worthy lead, Benedict Cumberbatch, whose intricacies perfectly capture the mind of a mathematician. As a professor of mathematics at a state university in Pennsylvania, I have a first-hand view into such thinkers and Cumberbatch sells the role extremely well. Everything from Alan Turing's difficulties handling social settings to his full-fledged cognitive arrogance. Although I personally felt some of the moments were slightly overacted, Cumberbatch undoubtedly gives an accomplished performance alongside other stellar turns from castmates Keira Knightley and Matthew Goode. With yet another beautiful score from Alexandre Desplat and solid direction from Tyldum, The Imitation Game is an all-around formidable piece of cinema that will certainly find its way into many Oscar discussions.

Although The Imitation Game is a strong piece of filmmaking on various levels, one unfair criticism would be that the feature never really amazes in any particular area. Actually, the movie feels like a bit of a conundrum. For example, I commend the uptempo pacing of Tyldum's work, yet more interesting ideas and controversies surrounding Alan Turing's personal life become glossed over in order to achieve a more fluid viewing experience. While such decisions unarguably ease the responsibilities of both the filmmaker and the screenwriter, The Imitation Gamebecomes merely a partially told story that feels like a slight disservice to such a marvelous and significant man who has left his impression on the modern technological world.

All in all The Imitation Game is an unquestionable crowd-pleaser filled with humor, drama and everything in between. Dr. Alan Turing was a pioneer in the world of technology and a mathematical genius who helped defeat the Nazis. His story of heroics is one that is told very well throughout the film and one that everyone should know, so do yourself a favor and seek out The Imitation Game when it reaches theatres in December.