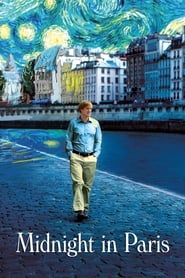 Woody Allen's famed career has spanned over 5 decades. His work has covered all types of genres and each film offering its own sense of wit and charm. The writer/director's latest work, Midnight in Paris, has been well received by critics across the globe. In the film, Allen reunites Owen Wilson and Rachel McAdams who previously won over audiences with their romantic comedy Wedding Crashers. Teaming up the onscreen couple with Woody Allen was too much to pass up, so I inevitably flocked to the theatre to screen the film.

Midnight in Paris follows a young, successful writer named Gil (Wilson) and his fiance Inez (McAdams) as they travel with her family to Paris. Gil has an envious, yet unsatisfying, career as a writer in Hollywood, and although his films have done pretty well, he's truly passionate about attempting a career as a novelist. After a wine tasting party one evening, Gil decides to walk the streets of Paris. As the evening unfolds, he finds himself caught up in an unbelievable situation. Mystified by the night's events, Gil spends the rest of the vacation blowing off his fiance and her family in order to experience midnight in Paris.

The timeless director has been very mediocre of late, yet with Midnight in Paris Allen recaptures that quintessential style we've all grown to love from him. The film offers a creative story that successfully delivers on laughs and charisma. In addition, Allen takes a story that's extremely easy to enjoy on the surface, but also connects with the audience on a deeper, more emotional level.

The star of Midnight in Paris, Owen Wilson, has experienced a lot in his brief career. After battling a bit of depression, Wilson's performance in the movie is the best he's been since 2006. Allen crafts a very likable character and Wilson does a fantastic job bringing him to life on the big screen. The movie is about a man's personal journey to understanding himself, and at the film's conclusion you're at peace with the character's personal transformation. All of which create an interesting parallel with Owen Wilson's own life and his onscreen persona.

Even though Midnight in Paris is an obvious success, the film has a few noticeable flaws. There are a few holes in the plot and Rachel McAdams gives a performance that definitely detracts from the film's success. If you're looking for an easy watch and an uplifting film, Midnight in Paris certainly won't let you down