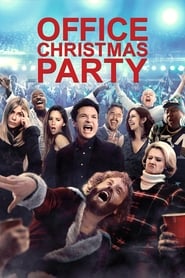 The modern Hollywood comedy has become completely inept and devoid of any real talent or creativity. You can look no further than Josh Gordon and Will Speck's new holiday film, Office Christmas Party, to understand just how barren the genre has become. Even a long list of recognizable comedy favorites isn't enough to salvage this jumbled mess of a film.

Fresh off a divorce, Chief Officer Josh Parker (Jason Bateman) and his overseeing branch manager, Clay (T.J. Miller), have their holiday spirit crushed when the company's CEO (Jennifer Aniston), threatens to shut them down unless they can secure a huge potential client. So rather than cancel their annual office Christmas party at the CEO's behest, they double down on the evening's shindig by trying to impress the client with an outrageous bash that he'll never forget.

Careless storylines, poorly scripted jokes and an overall lack of quality ideas spoil the latest comedy effort from the directing duo of Josh Gordon and Will Speck (Blades of Glory and The Switch). Ironically, Office Christmas Party opens with a flurry of well-earned laughs, but then unravels quickly thereafter. This early onset of humor provides a glimmer of hope that's held on to for way too long, up until the film ultimately reaches a point of no return with its female pimp character, played by Workaholics supporting star Jillian Bell. The film's attempt at a romance subplot stands as its most formidable aspect, but even that feels sadly forced. Silicon Valley co-star, T.J. Miller, once again validates that he's only tolerable in small doses. Unfortunately, he's asked to carry the weight of the film and everything else crumbles from there. Office Christmas Party fails to produce any memorable qualities and, in all honesty, it isn't worth your time or effort.