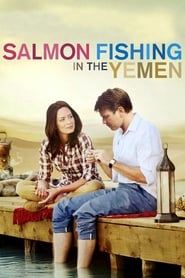 Rarely will a film's title turn you off as much as director Lasse Hallstrom's latest effort, Salmon Fishing in the Yemen. Even as someone who's a fan of casting a line and relaxing the day away, Yemen ... really? Although most people probably know very little about the country, Yemen is located on the southwestern part of the Arabian Peninsula and directly across the Red Sea from eastern Africa. And while salmon are a species of fish that require cool water conditions in order to survive, how can these two polar opposites coexist? Here lies the unorthodox beauty within the film.

Based on the Paul Torday novel of the same name, Salmon Fishing in the Yemen follows a British fisheries expert named Dr. Alfred Jones (played by McGregor). When Dr. Jones is approached by an investment consultant named Harriet (played by Blunt) about a client's desire to introduce the sport of salmon fishing in the Yemen, he quickly dismisses the preposterous notion. However, a public relations disaster prompts a British political figure to force Dr. Jones to bring this project back to the forefront. Upon a more in depth second glance into the idea, Dr. Jones opens his mind to the possibility that salmon fishing in the Yemen could actually work.

Lasse Hallstrom's extensive career can be used to appropriately label the Swedish director as a sentimentalist. Having been the vision behind films such as What's Eating Gilbert Grape, Hachi: A Dog's Tale, and Dear John, Hallstrom has a keen sense of the deepest human emotions. With his newest work, Salmon Fishing in the Yemen, the director once again successfully attempts to tug at the audience's heartstrings. The biggest reason that this obscure tale resonates so well on screen comes at the hands of the picture's leading stars, Ewan McGregor and Emily Blunt. Like clockwork, the quirky duo portray a pair of troubled, yet endearing, characters that viewers can't help but cling to. McGregor and Blunt have excellent chemistry and they offer an unmatched sense of charm. In addition to its main stars, perhaps the most notable performance is delivered by the always sensational Kristin Scott Thomas (Nowhere Boy). Thomas plays a British political figure who's desperate to make this story work. Delivering laugh after laugh, Scott's minimal amount of screen time is by no means wasted. Alongside of Hallstrom and his entire talented cast, Oscar-winning screenwriter Simon Beaufoy (Slumdog Millionaire and 127 Hours) triumphantly pens another fantastic script. Filled with plenty of laughs and raw emotion,Salmon Fishing in the Yemen is a multidimensional film that is undeniably well rounded.

On the other hand, Salmon Fishing in the Yemen does have a few lacking elements. For starters, the feature's fundamental love story struggles to hold water. The budding romance between the film's main characters feels slightly mishandled as it fails to hit home like movie's central plot. Furthermore, the hour and 51 minute duration doesn't speed by with ease. Occasionally you may find yourself yawning through the third act, but the smattering of well written jokes and the fascinating story make it impossible to give up. Therefore, Salmon Fishing in the Yemen is a flawed, yet rewarding, motion picture.

Although I went into the screening befuddled by what to expect, Lasse Hallstrom's Salmon Fishing in the Yemen didn't disappoint. The film's obvious blemishes are outshined by its fantastic soulful story. The movie does a wonderful job of reinforcing its ideas of hope and blind faith. As always, Hallstrom serves up an uplifting and feel good story that is never bogged down by its inevitable schmaltz. I wouldn't hunt down the feature, but Salmon Fishing in the Yemen is a refreshing tale that makes for a nice weekend afternoon watch.