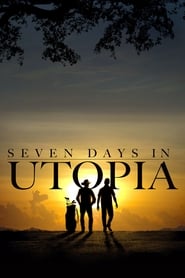 Lucas Black and Robert Duvall collaborated on screen in 2010 for one of the year's most memorable films, Get Low. The movie garnered much acclaim early in the year but it became forgotten over the passing months, resulting in a non-existent awards season for Get Low. The duo joins forces once again in their latest picture Seven Days in Utopia. Directing the film is newcomer Matt Russell, who is somewhat of an unknown throughout Hollywood. With a bare resume and a cast of talented actors including Academy Award winners Robert Duvall and Melissa Leo, the pressure is surely on for Russell.

Seven Days in Utopia follows Luke Chisholm (Black) a young, successful golf amateur attempting to turn pro. With his pressure filled father as his caddy, Luke leads his first professional golf tournament entering the 18th hole. However, when disaster begins to mount on the final hole, Chisholm loses control and has a meltdown. He shoots a 14, and begins to feel like his golfing career is over. While on a drive to clear his head, Luke accidentally crashes his car and is aided by a local named Johnny Crawford (Duvall). Crawford, an ex-golfer himself, promises to help Luke find his game again if he spends the next seven days in the town of Utopia, Texas.

There's plenty of things wrong with the film Seven Days in Utopia. It's G rating aligns with the fact that it feels more like a born again Christian advertisement than a moving drama. Russell fails to bring together a talented cast with an intriguing story, leaving the final product to feel unauthentic and overly flawed. There are parts of the film where the movie begins to turn the corner, but then it inevitably reverts back to its propaganda feel.

Despite a gifted cast, Seven Days in Utopia never reaches a point of satisfaction. Duvall, at times, is reminiscent of his Get Low character Felix Bush with a southern wit, and charm that gives the film a sense of hope. However, too many other minor characters end up stealing screen time, and as a result the movie suffers. Furthermore, Lucas Black proves to be an insufficient leading actor. Perhaps partially at the fault of the director, Black falls short of taking the film to the next level.

Seven Days in Utopia is a decent idea for a script that never seems to translate well on the big screen. The film is an eyebrow raising combination of The Karate Kid meets Tin Cup meets a stereotypical B-rated Christian movie. In addition to its strange melting pot of elements, I was very displeased by the closing scenes of the film as they left a sour taste in my mouth. Not because of what's displayed on screen, but more so because of their counteractive effect on the story. I'd shy away from spending your time seeing Seven Days in Utopia.