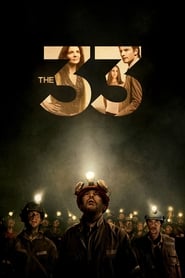 Arriving in theaters this weekend is Patricia Riggen's The 33, a real life drama based on the trapped Chilean miners who faced enormous odds while trying to survive a deadly collapse. Starring Antonio Banderas, Juliette Binoche and Lou Diamond Phillips, the melodrama is unspeakably high with this latest true story adaptation.

Despite many safety requests to the company's owner, 33 miners find themselves faced with death after a gold and copper mine traps them 2,300 feet underground. Government officials step in to work as swiftly as possible to rescues these brave men, but their strength, courage and sanity start to waver as food and water begin to run out with each passing day.

I've always enjoyed the fine career work of both Antonio Banderas and Juliette Binoche. And in all fairness, each of these performers possess a few shining moments in Patricia Riggen's over-dramatized survival flick. However, the constant recycling of facing an obstacle and overcoming the odds only to face another issue, it becomes a very tiresome ordeal. As a result, The 33 massively overextends itself and its more powerful moments become diluted by stereotypical Hollywood dramatization. The film has unjustly received overwhelmingly harsh reviews and, while it's not an awful viewing experience, its flaws clearly outweigh its positives