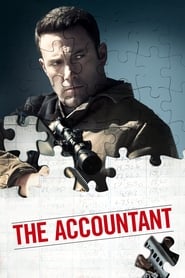 After a recent string of successful releases, one of which earned a Best Picture Oscar, Ben Affleck has proven to be a far more accomplished director than actor. However, Affleck puts his acting chops on display in Warrior director, Gavin O'Connor's, new action-drama, The Accountant. Yet, despite nailing the role, Affleck's latest film never feels as good as it should be.

As a socially inept mathematical savant, Christian Wolff (Affleck) is raised by his military father and trained by martial arts experts to become a human weapon. As the years pass Christian works as a freelance accountant for some of the world's most dangerous criminals. But as the U.S. Treasury department closes in on Christian's identity, the accountant is left to solve the mystery surrounding his latest client.

The Accountant opens with a very strong first act that sadly crumbles throughout the rest of its more than two-hour running time. As the plot thickens and smaller storylines continue to form, the film reveals countless inadequacies. Surprisingly, The Accountant effectively uses comedic dialogue to its advantage, something that was rather unexpected, but it also serves as a reminder of the cloudy direction and undetectable tone missing from the film. Lately, leading star Ben Affleck has displayed a preference for roles in which his character is devoid of emotion (Gone Girl and Batman v Superman), something that rings true in this performance as well. That openness to social interaction does evolve into one of Christian Wolff's character arcs, thanks to a usual and type-casted supporting turn from Anna Kendrick. Yet, O'Connor's desire to put a nice bow on every little detail of the film actually backfires and transforms The Accountant into an over-filled and muddled mess of a story.