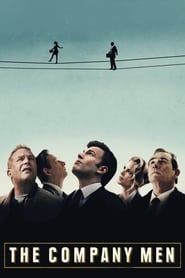 I'm not one to get all "political", but people are still feeling the effects of the economic crisis that hit the United States in 2008. Despite their notable efforts, I know hand fulls of young, college educated adults who are still unemployed. Therefore, when I first saw the trailer for director John Wells' The Company Men, I was very intrigued. With an all-star cast including Ben Affleck, Tommy Lee Jones, Chris Cooper, Kevin Costner, and a local product Maria Bello (from Norristown, PA), how could I not be eager for its release?

Set in the years 2008 and 2009, The Company Men follows the lives of three highly regarded employees at a major American company. Having giving over a decade of service to their employer, Bobby Walker (Affleck), Phil Woodward (Cooper), and an executive Gene McClary (Jones) find themselves caught in the middle of corporate downsizing during the economic recession. The Company Men shows these individuals and their families coping with the heartache and sacrifice needed to stay afloat during these trying times. And ultimately, the film depicts the lack of reciprocation that goes with the dedication these men have to their profession. As the tagline goes, "in America, we give our lives to our jobs ...", and at the end of the day, most workers in the business industry are just a name and number on a payroll sheet.

The film's director, John Wells, takes his first shot at a feature length film with The Company Men. As it turns out, the result is just a hair under two hours of constantly watching these characters experience rejection time and time again. The first major flaw in the film comes from the situation created by Wells (who also writes the script). It's difficult watching these wealthy men (annual salaries well north of $100,ooo/year) lose their jobs and acting irresponsibly. Seeing their arrogance and sense of entitlement first hand, the audience inevitably struggles to sympathize with the characters. For example, Affleck's character (Bobby Walker) is granted 12 weeks full pay and benefits as part of his severance package. However, the Porsche owner refuses cutting back spending and even selling his car, all while trying to support a wife and two children. It's instances like this that make it difficult to empathize with the main characters, even though they're left devastated by such a negative experience. When you're telling a story about such a depressing topic, it's only logical to create characters with whom the audience can connect. John Wells certainly fails at doing so.

Despite the lack of likability with some of The Company Men's leading actors, the film adequately portrays the struggles that many unemployed americans are dealing with on a daily basis. Topics like relocation, decreased salary, and resorting to blue collar work are addressed. It was nice to see the movie touch base with the harsh realities of job loss and the various extremes they need to face, in order to support their loved ones. In addition to the film's admirable attempt at tackling the issue of losing a job, the acting was also worthy of mention. All of the leads give stellar performances, Affleck included.

Even though the film is obviously flawed, there are still plenty of moral lessons to take from the movie. The Company Men certainly won't dazzle you, but if you're a member of the business community or have been effected by a job loss, it might be a suitable watch.