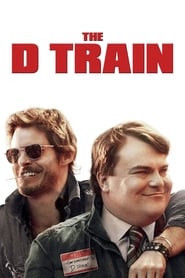 Critiquing films can often be a formidable challenge. Sometimes movies leave little or no overwhelming feelings of joy, sadness, or any other traceable emotion. But with the newest Jack Black comedy from the pair of first-time directors and Yes Man writers, Andrew Mogel and Jarrad Paul, I walked out of the theater with plenty of opinions to get off my chest.

Black takes center stage as Dan Landsman, a friendless suburbanite and self-proclaimed chairman of his high school reunion committee. When the expected turnout for their 20th reunion reaches a pathetic low point, Dan catches an old classmate named Oliver Lawless (James Marsden) on a national tv ad and decides to do whatever it takes to get him to attend. He spins a web of lies and goes to unspeakable lengths with disastrous consequences just to prove that he's cool enough to land Oliver Lawless.

Without sugar-coating anything, The D Train is a reprehensible comedy that should be avoided at all cost. It's a muddled and over-extended 97 minutes of pure awkwardness. Mogel and Paul team as both writers and directors in this unforgivable examination of a human's longing for acceptance. Their goal seems somewhat clear, through the film's jumbled story and deplorable twists and turns. However, their message could have been concocted in a much simpler and more gratifying way. But instead, The D Train buries itself in unnecessary situations - for the lone purpose of "shock value", I'm sure - resulting in a completely uncomfortable and unpleasing experience.

Despite its horrific plot and minimal amount of laughs, The D Train shines in one singular spot. Jack Black has truly molded himself into a worthy performer. Over the years the comedic actor has honed his dramatic skills and the by-product is something to be lauded. Jeffrey Tambor and Kathryn Hahn also give effective supporting turns, but each of these performances are ultimately squandered by the film's inability to tell a funny and cohesive story.

With all of the mega-titles finding a release this month, you'd be ill-advised to spend your time and money on The D Train. With almost no redeeming qualities and a short supply of humor, this inadequately labeled comedy has very little to offer. Stay clear and look elsewhere.